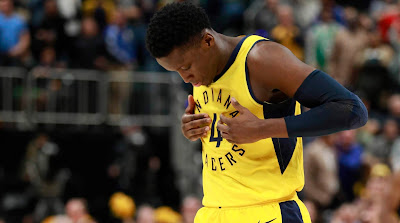 The Celtics turned to their closer in Kyrie Irving in the fourth quarter against the Pacers and he converted one of the toughest shots of the night.

We've heard this story line time and time before. It's been the recipe for success so many times for Brad Stevens.

There aren't a lot of other players in the league who are as clutch as Irving. It's a short list, and whether he's going off offensively or having a poor shooting night -- when the game is relatively close, Irving typically gives the Celtics a chance to win in the fourth quarter.

After having a modest scoring night through three quarters Saturday against the Pacers, Irving took matters into his own hands in the final frame. He racked up nine points and drained two back-to-back treys, including one from the corner with 38 seconds left as the shot clock expired.

It seemed like Irving put the Pacers away for good when he made it a two-possession game (101-97) before he missed a contested layup down the stretch, opening a window of opportunity for the Pacers. Victor Oladipo had the final say and drained a game-winner in Irving's face with 3.4 seconds left.

It'd be unfair to say Irving, who pushed his team ahead in the final minute, blew the game for the Celtics at the end. But Oladipo's cold-blooded 3-pointer topped his 5-0 run that put Boston away for the night.

The All-Star point guard has evolved into one of the most dominant guards in the Eastern Conference and added another impressive performance to his young resume. Oladipo finished with 24 points, 12 rebounds and two steals.

Irving, who scored half of his points in the fourth quarter, finished with 18 points. Marcus Morris led with a team-high 23 points.

The Celtics' road trip doesn't get easier from here, they'll head to Denver to take on the Nuggets on Monday.

Pacers: Converted 14 Celtics turnovers into 17 points on the night.