Robert Williams proved his worth against Heat 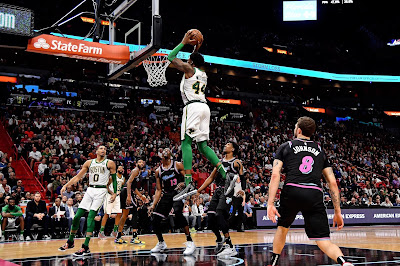 The athletic big has the potential to become an every day NBA rim protector but still has a lot to learn. He's raw. But he's made his presence felt in a minimal role for the Celtics at times when his team needed him to make an impact and Thursday night against the Heat was his greatest example.

The Heat got off to a quick start after halftime and ran with a huge lead in the second half but once it reached 26, Brad Stevens called upon Williams to help chip away the deficit. He kept it simple when he told his rookie what he needed from him.


"Just (bring) energy," Williams said when asked what Stevens told him before putting him in. "(He) felt like our energy was down tonight, it wasn't where it needed to be, especially coming from this team. I just try bring energy and get open shots for our scorers."

That energy led to one defensive stop after another, which triggered the Celtics' fast break as the offense fired off a whopping 28-7 run. Miami eventually prevented Boston from completing the second-half comeback but the lasting effects of Williams' performance resonated with his head coach and teammates.


"Robert gave us a huge lift," Stevens said. "He was excellent. He does a lot of things that he's still learning. You saw a couple of screens or a couple of times on hand offs where he was a little bit behind the action, a little bit behind of what the guard was trying to do on offense but when he puts pressure at the rim with his rolls and he defends the way he does – he gave us good lift. I mean, he gave us a chance along with that group."

Stevens' comments on Williams' night in Miami certainly encompasses what the rookie big man is to the Celtics. On the defensive end, there's not a lot to complain about aside from positioning and timing but offensively, his struggles has a lot to do with the same shortcomings you tend to see on the opposite end of the floor.


"He's almost like a clay figure right now – we're just molding, we're help molding," Kyrie Irving explained after Thursdays' loss. "He's so athletic, so smart as a basketball player already but he can continue to get better so we want to see him do well. We're going against other athletic bigs, he really makes a difference. You see Hassan (Whiteside) in there and he's clogging up the paint, then when Rob came in, a lot of the shots and layups that they got in the first half weren't going down.

"He was in there effecting shots, he's really good at doing that. Also, on the offensive end, in terms of spacing, me and him ran into each other a few times; where I'm coming off and he's getting used to my game. So, just continuing to talk to him and be able to help him gain more information or knowledge on the game (will help him out)."

His pick-and-roll sets needs work on both ends. However, the potential of who he can become begs the question if he's better suited for more playing over back up big man Daniel Theis.

The answer is: not yet. Stevens has a way of getting the best from players you least expect and in the past, one of the reasons he's able to do that – especially with his rawest talents – is because he keeps them hungry; thirsty for more.

Giving Williams playing time in the midst of a comeback or when the Celtics are on the wrong end of a lopsided deficit will keep him engaged and in tune with his teammates throughout some of the most frantic moments of the season. This will pay off in the long run.

Whether that means seeing Williams help the Celtics win a game or two in the postseason or eventually seeing him take over Theis role as the secondary big man next season, Williams is better off staying right where he is in Stevens' depth chart. He will learn and progress better this way, instead of taking on an increased role quicker than he or anyone else expected.


Brad Stevens talked about the #Celtics letting this one slip away despite the hot shooting to open the game and how #RobertWilliams made an impact against the #Heat during their 16-0 run in the third quarter pic.twitter.com/N2pik2ojOH
— CausewayStreet (@CausewayStreet) January 11, 2019