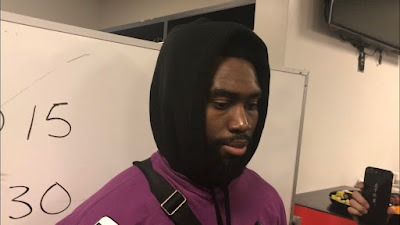 BROOKLYN – Kyrie Irving's criticism of his team following the Celtics' loss to the Magic Saturday may have struck a cord with one of his teammates.

Although he plans on never questioning his team ever again, Irving's comments certainly resonated with Jaylen Brown, who alluded to what Irving had to say when he spoke to the media Monday night following a 105-103 loss to the Nets. After what was the Celtics' third consecutive loss, Brown was asked about what was said in the locker room between him and his teammates.

"We have to be more accountable as a group," Brown explained. "It's not one guy's fault, it's not young guys, old guys' fault. It's everybody. We all have to be accountable and turn this thing around."

Irving's strong take on his experience and what he does to prepare for each and every game didn't necessarily come as a surprise but questioning his team's approach and discipline, after losing to the Magic, certainly did. It sounds like Brown doesn't agree with Irving's approach in publicly addressing the matter with the media, and how Irving questioned his teammate's work ethic.

Interesting comment from Brown, considering Irving admitted that pointing fingers after Saturday's loss was something that came out of frustration while he's still trying to figure out how to be the best leader he can be. It started with Irving criticizing Hayward's late-game decision to pass the ball the Jayson Tatum and ended with the All-Star point guard wondering if his team truly understood what it takes to be a great team.

Irving (quad) did not take the floor against the Nets, while Brown put together one of his better performances of the season behind his 22 points and 6 rebounds. Still, the turmoil of what was a bad road trip -- on and off the court -- will follow the Celtics back to Boston as they prepare to take on the conference-leading Raptors on Wednesday.

From Marcus Morris pushing Brown during a timeout in Miami to Irving's comments in Orlando, the Celtics are struggling to discover their identity while trying to figure out how to string together wins and stay afloat in the top half of the Eastern Conference.