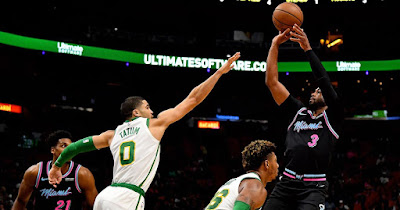 MIAMI – Kyrie Irving couldn't shake off the frustration of Thursday night's loss against the Heat minutes after the final buzzer.

It bothered him so much that he figured the best thing for him to do was to get some shots up in an effort to lessen the pain of dropping a 16-point loss against the Heat. Irving doesn't always do this immediately after losing a game, but the All-Star guard felt compelled to do so in order to shake off the loss and prepare for Saturday's matchup against the Magic.


"That's my job, right? Irving asked. "It's always good to get some extra work after a tough loss. I mean, they shot extremely well. They did some great things tonight, have to give credit to the Heat team, they came prepared – made some big shots. We just couldn't get that run.

"(The lead) shrunk down a little bit smaller. I just wanted to get some extra shots and feel good going into the next game. We're staying over in Miami, so I rather be in here than be out in Miami right now."

It was an interesting move by the All-Star point guard, considering he didn't have a bad shooting night. Irving finished 10-of-19 from the floor to go with his 5 assists, he led his team in scoring with 22 points but would have gladly traded that stat line for a win. Instead, the Heat topped the Celtics, 115-99, snapping Boston's four-game winning streak.

Marcus Smart drained 4-of-8 from behind the arc on his way to 18 points, Jayson Tatum and Marcus Morris each finished with 17 points along with a combined 5-of-9 from deep but aside from that kind of production (including Irving), no other Celtics player scored more than six points. The Heat on the other hand, had a much different approach.

The Celtics at one point trailed the Heat by 26 points before going on a 21-3 run that pulled themselves to within single digits before Miami poured it on in the final frame. However, maybe that wasn't the only thing that was bothering Irving.

Maybe he needed to clear his head of not just the loss but of the hurdles that came with it, obstacles that Irving has faced all season long in trying to get the best out of his teammates. The latest transgression between Marcus Morris and Jaylen Brown certainly stood out, following Thursday's loss.

In the video, you see a frustrated look on Irving's face second after Morris and Brown were separated. Not assuming it's the sole reason that led to the impromptu shooting session, however, maybe the tension between teammates is just another thing that he's growing tired of seeing at this point in the season.

Although Irving smiled a lot throughout his scrum with the media, the shooting session seemed like the best way for him to clear his mind at the time and focus on the Celtics' next game in Orlando.

Heat: Shot 47.9 percent from the floor, including 18-of-39 from deep. Boston, who in their last five straight games recorded 30 or more assists, finished the night with 20 against Miami.