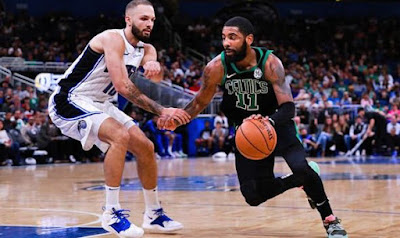 ORLANDO - Kyrie Irving wanted to have the final say in regulation of Saturday's game against the Magic before the Celtics 105-103 loss at the Amway Center.

With the game on the line, he couldn't hide his emotions after Gordon Hayward made an inbound pass to Jayson Tatum for a game-tying fade away jump shot that bounced off the back of the rim as time expired. Instead, the Celtics All-Star point guard would have preferred a pass to Al Horford at the top of the arc – which would have led to a bounce pass to Irving, who was standing at mid-court ready to sprint into action.

Irving, who finished the night with 24 points, 6 assists and 5 rebounds, was visibly upset with Hayward as he raised his arms and yelled out to his teammate before heading over to him and expressing his discontent.


"There's a couple options that I had. J.T. (Jayson Tatum) on the curl was the first option I looked at and I decided to go with it," Hayward said following the game."

When questioned about what Irving wanted out of the play, Hayward was honest in his response to what Irving's direction was and how he wanted the final play to end with the ball in Irving's hands.


"I think he would have liked for me to pass it to Al and have him cut off of it," Hayward said. "You know, it was late clock and we've worked on that play before and I've seen J.T. (Jayson Tatum) hit that in practice countless times, so I felt like it was a good shot."

Irving wanted a chance to save the night after Aaron Gordon (28 points, 12 rebounds) and Terrence Ross (25 points) caught fire in the second half for the Magic. And when it didn't go Irving's way, he let Hayward know about it by shouting at him but was much more calm and composed when it was time to speak to the media.


"Next play," Irving replied when asked about his frustration towards Hayward. "J.T. got a good look. Move on."

Did he see an open play for him to capitalize on a pass to Horford?


"It's just a possibility, next play," Irving responded before he went into the bigger issue that he feels is plaguing his team. "The best thing I can say is experience, we're lacking it and because of that we have a lot of learning to do, so we have a lot of ground to make up in that aspect. You know, it gets tough. When it gets hard, you have to think. You have to do the right things. You can't gamble and think that it's going to be the winning play. You have to be able to play through the full 48 minutes, no matter what's going on and hold your head high when you make mistakes. When your job is called upon, you have to do it to the best of your ability. You have to come in and make an impact for the minutes that you're playing out there.

"You have to appreciate to be out there and just competing. It doesn't matter who you're going against, it matters the type of preparation you have -- what you're going out and trying to accomplish. What's the big picture? What are we doing here? These are a lot of things that I don't think that some of my teammates have faced of just every single day. It's not easy to be great."

Irving seemed to be the only Celtics player who wasn't thrilled about Tatum's final attempt. Although he agreed the jump shot was a decent look for Tatum, Irving dug into his team about lack of experience, making winning plays and how they need to prepare better.

Clearly, the "good look" Tatum took at the buzzer wasn't what Irving wanted at the end of the game and the camera didn't lie when we saw him speaking to Hayward right after the play. He also spoke to Stevens moments before the inbound play, and it looked as if he wasn't on the same page as his head coach before the play was executed.


Another look at Kyrie in the huddle before Celtics' last shot.


It's obvious that Irving's reaction wasn't just in the heat of the moment, the final play bothered him so much that he went into condemning his team for not having the sense to do what he wanted to be done. And by the look of Irving's conversation with Stevens, it's clear that the option to Tatum wasn't what Irving envision as 'Plan A.'

However, when Brad Stevens spoke to the media he fell in line with Al Horford (10 points, 11 rebounds), Gordon Hayward and Jayson Tatum (16 points, 6 rebounds) in the belief that the play was the best option even if the result wasn't one that anyone wanted.


"He (Hayward) had a couple of options on it and one of them is Tatum curling off that screen and being available for that shot," Stevens explained. "Obviously, Kyrie (Irving) is coming from the top, which we've seen before and when you're in that position, you're going to be lucky to get a good look at the rim -- which I thought Tatum got a really good look.

"Tatum's a really good player. We've believed strongly in him for a long time. It just didn't go down."

Marcus Morris added 17 points and 8 rebounds, while Jaylen Brown chipped in 13 points off the bench for Boston, who are now 25-17 on the season.

Evan Fournier capped his night with 18 points and Nikola Vucevic recorded a double-double (16 points, 13 rebounds) for Orlando's second straight win over the Celtics this season.

Boston is now on the verge of finishing off their three-game road trip with three consecutive losses as they head to Brooklyn to take on the Nets Monday night.