How Marcus Smart's shooting in practice carried over vs Nets 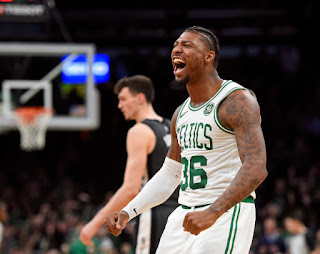 When Brad Stevens concludes each and every practice session, not every member of the Celtics immediately hits the showers.

Some players speak to the media, others get into individual workouts with assistant coaches, while guys like Kyrie Irving, Marcus Smart, Terry Rozier and Jayson Tatum compete in a 3-point shootout.

The rules are simple: each player has to drain five consecutive 3-pointers from the corner without missing in order to proceed to do the same from the elbow and the top of the key before continuing to the opposite elbow and corner of the 3-point arc. If you miss a single shot, your turn is over and the next player steps forward. The player who reaches the farthest around the arc wins.

It's become a new rivalry between the Celtics shooters lately; a competition for bragging rights that, if you ask Irving, has also translated into trust and confidence between his teammates.


"I think our 3-point competitions have been helping; just extra shooting that we're doing," Irving said as he smiled to reporters. "That was one thing that I really loved when I was in Cleveland [with] Mike Miller and James Jones. Shooting with those guys every day, I was getting my ass kicked. Those guys are professional – they're professional shooters, they shoot every day and they're shots are the same every time and they've been shooting for more years than I have.

"They probably have more shots than I have up so the best way to get that is to stay consistent in practice and go against one another and make it competitive, even though we're joking around, in the inside we're all trying to win. It's always good to shoot extra and just feel good about it and know that your teammates are there with you and we're seeing your shots go in and give us confidence in you and confidence in us."

Smart was the victor of Sunday's 3-point competition and his outside touch carried over to TD Garden Monday night. His level of confidence has turned him into one of the Celtics' best 3-point shooters lately – a surprising revelation for a 29.8 percent career 3-pointer shooter.

For the first time in his career, he's drained at least four 3-pointers in two consecutive games on a combined 9-of-16 attempts from deep against the Mavericks and Nets. It's a feat that Irving believes isn't a coincidence.


"It's just great to build that type of camaraderie and competition in practice," Irving said. "And then it translates into the game. He came out, you saw he won a 3-point contest yesterday and he's feeling good and he's shooting it and he's feeling comfortable and I want to say it won't be every game but when he's open we want him to shoot shots and when he's in rhythm; shoot shots. That's it. It's simple – it is a credit to his hard work."

Eight Celtics players scored in double figures as they cruised to a 116-95 win over the Nets at TD Garden on Monday. It was Boston's sixth win in eight tries, with Smart's 62-percent shooting clip from behind the arc providing an offensive spark in the starting unit throughout the Celtics' three consecutive wins.


"I've always felt like [if] he's continued to work hard; he's going to continue to get better," Stevens said. "I think that this year he's been really good about playing off of others. He's not looking for it, he's looking to make plays for other people but when the ball finds him in those spots, we need him to take those and make those. And he has all year.

"He works hard at it. He deserves to make them and you know, I think that he's always – we've always thought and you know this, he's got guts. He's going to make them when it all matters and so it's good to see him having some success from behind there."

Most teams don't consider Smart an outside threat, including Brooklyn. When the Nets reserves began shouting towards Smart throughout the first half, challenging him to shoot, Smart made them eat their words on his way to a terrific shooting night.

He made them pay while demonstrating his efficiency from deep. Smart was asked if it's frustrating to see opponents not respect his outside touch and his response didn't come as a surprise.

The Celtics will look to stretch their winning streak to four in a row when they welcome the Eastern Conference's third place Pacers at TD Garden on Wednesday.