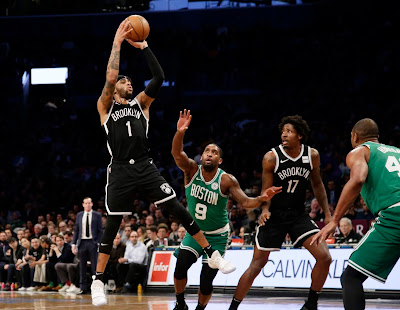 BROOKLYN – When the news of Kyrie Irving and Marcus Smart broke Monday morning, Brad Stevens knew he was going to have a thin back court heading into the Celtics' matchup against the Nets.

However, what he couldn't foresee was essentially missing half of his rotation. There were guys that were expected to come up big against the Nets, but instead they all individually put up duds throughout the first three quarters and were benched for the rest of night, even after Boston managed to turn a 27-point hole into a seven-point deficit.

It wasn't enough to trigger Stevens to make substitutions as Brooklyn topped Boston, 109-102. Here's a list of Celtics players that were M.I.A. Monday night while Jayson Tatum and Jaylen Brown did their best to salvage the game.

No other Celtics player has capitalized on games when Kyrie Irving is out of the lineup more than Terry Rozier. Irving's backup scored a season-high 22 points against the Jazz when Irving wasn't in the lineup and recently dropped 16 points on 6-of-10 attempts against the Timberwolves another night as the Celtics' starter watched from the sidelines.

However, against the Nets he was not a factor. Rozier settled for contested 3-pointer from behind the arc -- where he was 1-of-6. He finished with 7 points on 3-of-12 from the field and was a nightmare on the opposite end of the floor.

Nets guard D'Angelo Russell destroyed Rozier. He got all the looks he wanted from in and outside of the 3-point arc, blew by him for easy layups on his way to a game-high 34 points.

Russell netted 18 of his 34 points in the third frame -- which was enough for Stevens to sit Rozier for the rest of the night and hand the point guard duties to third-string point guard, Brad Wanamaker.

Monday was a great opportunity for Gordon Hayward to find his rhythm early and often against the Nets. January has easily been Hayward's best month of the season, from an offensive standpoint it's not about quantity when it comes to Hayward, it's about quality and lately his shot selection has improved throughout the first two weeks of 2019.

He entered Monday's game averaging 15.1 points while shooting at a 50.9 percent clip throughout his last six games. Hayward's approach has made all the difference, he wasn't rushing shots, taking contested 3-pointers or forcing unnecessary takes to the rim throughout that six game stretch but reverted back to old habits against Brooklyn Monday.

Instead of letting the offense come to him naturally, Hayward forced jumpers early in the shot clock. Throughout most of the Celtics' possessions, they rarely made more than three passes, especially in the third quarter -- when Brooklyn dropped 44 points.

Hayward's cringe-worthy stat line starts with three measly points on 1-of-6 attempts and a game-low -22 game rating. He joined Rozier on the Celtics bench at the 8-minute mark and never returned.

This was a rare night for Marcus Morris, who surprisingly got the rest of the night off around the 3-minute mark of the third quarter. He got off to a cold start and couldn't shake it off in the second half and even though the Celtics desperately needed scoring production down the stretch, Morris was never called upon.

As the team leader in field goal percentage (50.1), Morris has been one of Stevens' most reliable scorers, especially throughout some of the most epic NBA comebacks of the season. Still, Stevens elected to stick with his big man lineups based around guys like Daniel Theis, Guerschon Yabusele and Robert Williams.

Morris never got a second chance to turn things around and finished with 8 points on 3-of-11 attempts.

For a player who recently had his minutes restriction extended, this one was a head-scratcher, for sure. Although Al Horford wasn't dominating offensively and was a bit behind on the opposite end, benching the veteran big man throughout the final frame came as one of the bigger surprises in Stevens' decision making.

On paper, 8 points on 3-of-5 in 19 minutes doesn't necessarily jump out at you, however in the past, Horford has been a vital piece of most Celtics comebacks. His defensive presence typically gives Boston an edge but that wasn't the case Monday night.

Meanwhile, Tatum and Brown each finished the night with stellar performances. Tatum scored a career-high 34 points and Brown finished with 22 points but it was no match for the Nets' big cushion that was too steep for the Celtics to completely crawl out of.

Either way, if the potential comeback was going to happen, it was going to be without Rozier, Hayward, Morris and Horford. It was Stevens' way of disciplining his guys for an atrocious third quarter that became the story of the night and the true reason why the Nets managed to keep the Celtics at bay.

For Stevens, it's back to the drawing board just in time for the Eastern Conference leading Raptors, which the Celtics will host at TD Garden Wednesday night.