Celtics 113, Hawks 105: Celtics picking up steam at the right time 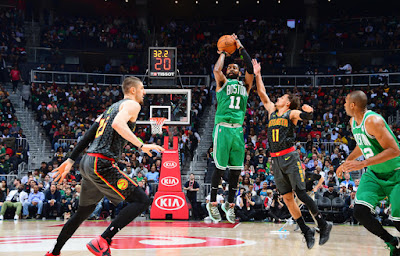 With 46 games under their belt and six games behind the first place Bucks, the Celtics have their work cut out for themselves between now and the end of the regular season.

They're currently fifth in the east and hold the worst away record (11-13) compared to the four teams ahead of them. Boston struggles on the road, its impressive 17-5 mark at TD Garden exemplifies just how important home court advantage throughout the playoffs will be, meaning dropping games against some of the worst teams the league has to offer has to be a thing of the past if the Celtics are going to have a shot at making a push for first place.

The Celtics have had some ugly losses this year. Dropping games to teams like the Knicks, Suns and Mavericks -- three teams that are currently in position for a top-five draft pick in next year's draft -- didn't do them any favors and when they made the trip to Atlanta to complete the second leg of a home and away back-to-back set, the Hawks pounced on the opportunity to pull off an upset.

Atlanta ran away with a 16-point first half lead. No standout performance on their side, they relied on good defense and high-percentage shots but couldn't contain the best player on the floor.

Kyrie Irving put together his best first half of the season, scoring 23 points, which trimmed the Celtics' deficit to six points at the break before the Hawks showed their true colors throughout the final frame. Boston coerced Atlanta into committing 20 turnovers on its way to a 113-105 victory.


"We needed that kind of response compared to what we have done in the last few opportunities on back-to-backs," Brad Stevens said after the game. "No question about that."

Celtics are also going to need this kind of momentum as they approach the All-Star break -- which is 12 games away. Throughout that span, which features a five-game home stand starting Monday night against the Heat, the biggest challenges will be facing teams like the Warriors, Thunder and Sixers.

It's a tall task for a team that's still searching for its identity in January. However, the Celtics -- a team currently on a eight-game winning streak at TD Garden -- have to take advantage of the most home-friendly month of the season as they have an opportunity to cover ground behind the Bucks and Raptors.

Celtics: Jaylen Brown (3) and Terry Rozier combined for 6 of Boston's 10 steals while Al Horford (4) led in offensive rebounding (11), which the Celtics converted into 17 second-chance points