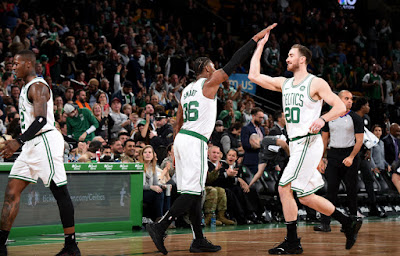 Gordon Hayward is in the midst of his worst stretch of the regular season.

With 44 games under his belt, Hayward showed flashes of brilliance against the Timberwolves with two 30-plus point performances, averaged 15 points throughout the first four games in January but has struggled to find consistency ever since. Throughout the Celtics' recent stretch, Hayward is averaging 7.2 points while shooting 27.5 percent from the floor and has finished games on the wrong end of the plus/minus statistic in three of Boston's previous four games.

Following Saturday's loss against the Warriors, Hayward had a golden opportunity to bounce back from his two-point dud against the Nets Monday night but instead went scoreless until he converted a breakaway dunk -- his only points of the night -- in the second half of the Celtics' 112-104 win. What's alarming for the Celtics is the number of open looks Hayward is getting; his teammates are making a conscious effort in trying to get him shots but the ball hasn't been finding the bottom of the net.

Between Saturday's loss and Monday's layup in the second half, Hayward missed 10 consecutive field goals before he finished a combined 1-of-11 in his last two outings. Still, he's playing 22-plus minutes a night off the bench; him and Jaylen Brown lead the second unit in minutes per game.

However, how long should Brad Stevens wait for Hayward to turn things around before cutting his playing time? He's going to wait a while, don't expect to see his minutes diminish any time soon.


"I think you just got to keep playing him and ultimately he's going to have some ups and downs, and he's had a couple of games where the ball didn't go in as much," Stevens said. "I thought he was active tonight, I thought he did some good things and when the ball goes in, he'll feel a lot better and it will look a lot better on paper. Ultimately, we got a lot of wings, a lot of other wings played more tonight and against Golden State but there are going to be nights where we are counting on him to close the game because he really got it rolling."

Hayward played his best basketball of the season at the start of January so there's still a good chance he'll turn it around soon. Meanwhile, Boston has won six of its last seven games, therefore, as long as they continue to stack up wins Stevens has little reason to be impatient with Hayward.

Sure, the Celtics could have used Hayward's offensive production against the Warriors over the weekend, it could have made the difference between winning and losing but Stevens isn't going to give up so easily on one of his max guys. He did the right thing in demoting Hayward to the second unit early on in the season, it would have been a mistake to prolong what was inevitably necessary in order for the Celtics to turn things around from their 10-10 start.

Now, it's up to Hayward to take advantage of his minutes and find other ways to be productive. He's improved in being a secondary play maker and a decent defender, which the Celtics are hoping will ultimately translate into scoring production in due time.