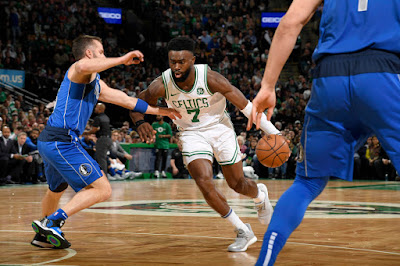 For Jaylen Brown, Kyrie Irving's guidance has been instrumental to the Celtics' recent success.

Despite sitting out the past two games due to an eye injury he suffered Monday night against the Spurs, Irving has played a role in leading the Celtics from the bench and in the locker room.

Since Monday night's game, no other Celtics player has thrived more than Brown. While averaging 20.3 points and shooting at a 61.2 percent clip throughout the past three games, Brown has found a level of consistency he's been searching for all year long.

Is the sample size a small one? Sure. However, the fact that Brown was quick to mention Irving's influence on not only himself but the entire team, speaks volumes to what Brown thinks about Irving's leadership.

Prior to Friday night's contest against the Mavericks, Irving spent time with each and every one of his teammates and was vocal throughout the game. Brown gave his starting point guard the kind of praise we haven't heard this season, following his game-high 21 points on 9-of-15 attempts.

He was at a loss for words when trying to describe what Irving did in the locker room before describing how Irving made a point of emphasis to speak to each of his teammates individually before and after the Celtics topped the Mavericks in a 114-93 victory. But one person who knew exactly how to describe Brown's season was head coach Brad Stevens.

Heading into the regular season, Brown set goals as high as anyone. This time around, Irving's words of wisdom could lead to a potential turning point.


"I don't think it's fair to peg the slow start on one player and I think that certainly I've gotten a lot of questions about Jaylen, just because of everybody's expectations for Jaylen are as high as his are," Stevens explained. "At the end of the day, he's not going to be perfect; he's going to have ups and downs but he stays the course, he gets ready and he's --

"Everybody's going to go through those slumps until you come out of them. He's come out of his well and has really strung together a couple of weeks of basketball and we're going to need him to continue to be that for us. But it was great to be able to -- (Marcus) Morris, we found out Morris was out and bang, you can throw him right in and not quite as big but you're just a versatile defensively."

The Celtics did a terrific job defensively out of the gate when they forced five Mavs turnovers in the opening minutes and did a solid job of containing Doncic throughout the first half. It was the defense that made the difference in final frame as the kept Dallas at bay.

Boston will look to go three-for-three in their four-game homestand when they take on the Nets Monday night.

Celtics: Five players scored in double figures and for the second straight game, the Celtics never gave up a lead.