Kyrie Irving to sit out against the Wolves with eye injury 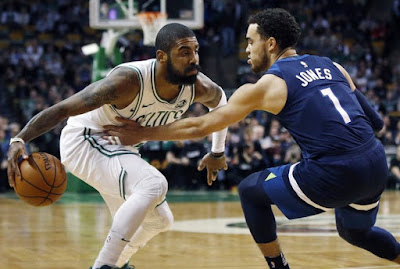 The Celtics will commence 2019 without their All-Star Kyrie Irving when they host the Minnesota Timberwolves tonight at the TD Garden.

Irving suffered an eye injury during the Celtics 120-111 loss on New Year's Eve when he and Spurs guard Marco Belinelli both tried to grab a rebound midway through the fourth quarter. Belinelli swatted the ball while hitting Irving in the eye.

Irving, who initially got hit in both eyes, briefly left the game with 7:22 remaining, but returned with 4:37 left to play, managing to only score two points the rest of the way, while also recording a steal.

Coach Brad Stevens was not sure how much time Irving would miss, after it was said that the Celtics guard had a scratched left cornea.


"Kyrie has a scratched eye," Stevens said. "So he'll have antibiotics for that. I don't know what that means beyond tonight.

"We watched film for an hour and a half in my office yesterday, and he was wearing sunglasses. He's not doing so hot once he takes those sunglasses off."