Kyrie Irving, Marcus Morris will play against the Nets 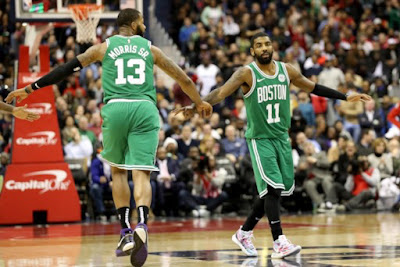 The Celtics are expected to have both Kyrie Irving (eye) and Marcus Morris (neck) back in the lineup on Monday night when they host the Brooklyn Nets at the TD Garden.

Irving, who has been sidelined since being hit in both eyes by Marco Belinelli back on New Year's Eve, spoke to the Boston media following shoot-around on Sunday. The Celtics All-Star commented about his injury and if he believed the Spurs' guard intentionally tried to hurt him.

"I make my living with my eyes," Irving said after his first full practice fully with the team. "My whole entire body, but my eyes are just one of the most important things that I need to play this game. It was swollen, and there was light sensitivity after the initial hit.

"Watched it a few times, trying to figure out whether or not it was malicious or not, but I don't think it was. So I'll let it go. But I got hit pretty good, and I'm just glad to get a few days' rest, as well."

Irving has missed Boston's last two wins at home against the Timberwolves and the Mavericks since suffering his injury during the fourth quarter of the Celtics road loss to the Spurs last week.


"They're OK," Irving said of his eyes after having shooting contests with teammates during practice. "Right eye had a scratch in it, left is just really inflamed, so just kind of waiting for it to kind of calm down. It's going to take time, but I'll be ready for [Monday]."

The Celtics guard said that it was just bad timing when in came to fighting for a loose ball that led to his injury.


"I think he got both eyes pretty good because when the offensive rebound came off the rim, my eyes, they just kind of widened, and then he caught me right as I was about to go attack the basketball, said Irving. "So I see the ball go off the rim, my eyes widen and he comes and gets me. It's OK."

Marcus Morris, who sat out against the Mavericks on Friday night with a sore neck, will make his return after hitting the floor hard in the Celtics win over Minnesota last week.


"It's a lot better," Morris said on Sunday. "I've been working on it the last three days. Motion's better. Feels good."

Celtics rookie Robert Williams III (groin) will also be available against the Nets for Brad Stevens, leaving only center Aron Baynes (hand) still left on the team's disabled-list. Baynes fractured his left fourth metacarpal during a Dec. 19 loss to the Suns at home and will be re-evaluated next week, while he still not participating in team practices yet, the big man has been limited to individual conditioning for the time being.