Celtics 116, Nets 95: Marcus Smart's play resonates on both ends of the floor against Brooklyn 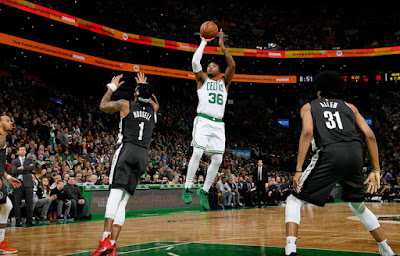 Marcus Smart continues to bring the best out of his team. He came out on fire to start, hitting three treys to keep pace with the Nets as the Celtics eventually cruised to a 116-96 win.

This is Boston's third straight, advancing their record to 24-15. Since being added to the starting lineup back in November, the Celtics lead the league in team assists (28.2) and have ran a crisp offense that tallied 37 assists Monday night with Kyrie Irving and Smart combining for 13 of them.

In a brilliant display of unselfishness, the Celtic held the plucky Nets at bay despite being out rebounded by them (47-43). Smart ultimately finished with 12 points with all of his points coming from behind the arc but led both teams with a game-high 7 assists.

Being without Joe Harris left Brooklyn with little options on offense and another option for a ball-handler. The ball flew around carelessly whenever a member of the Nets touched it, while the Celtics seemingly had it on a rope the entire game.

Rodions Kurucs led with a game-high 24 points, including 5-of-8 from deep and Spencer Dinwiddie added 15 points, however, the Nets turned the ball over 23 times, which translated into 30 Celtics points. The Nets shot a measly 79 times to Boston's 93 and the Celtics were able to create so many turnovers by attacking Brooklyn's pick-and-rolls and players like Irving jumping the passing lanes.

Irving collected three steals and the Celtics finished with 13 as a team. When engaged, Irving can be a useful defender, he proved, that drastically heightens the ceiling for this team.

This has been a result of Smart's passion and vigor of being plugged in to play alongside Irving in the back court. The Celtics will look to extend their winning streak to four against the Pacers on Wednesday at home before heading out for a three-game road trip.

Celtics: Shot 50.5 percent from the floor, including 56 points in the paint