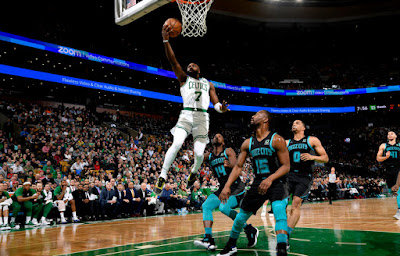 Jaylen Brown's play in 2019 has certainly flown under the radar.

The primary talking points surrounding the Celtics this calendar year have been Gordon Hayward's shortcomings, the dreadful 0-3 three-game road trip and if Kyrie Irving's conversation with LeBron James will lead to a reunion in Los Angeles this upcoming summer. Meanwhile, Brown averaged just under 19 points a night throughout his past four games, including back-to-back 20-plus point performances where he was the most efficient scorer on the floor.

His latest performance against the Hornets Wednesday night was one of his best games of the season. Brown cruised to 24 points on 10-of-18 attempts to go with his 10 rebounds as he beat defenders off the dribble for high-percentage shots and utilized open mid-range jumpers against Charlotte.

The Celtics capitalized on a 20-3 second-half run that turned their double-digit lead to an all out blowout on their way to a 126-94 win.


"It's one of those nights where Jaylen, I thought, not only got going on the offensive end with good, solid action and play-off of actions but then also played with great effort to get a couple of loose balls that ended up landing in his hands and he laid it in," Brad Stevens explained. "So, I thought that that's usually a good sign you're really engaged in the game, if you've got a nose for the ball. And I don't think that's a coincidence that the ten rebounds coincided with a great shooting night. You see that a lot."

Brown's had to do a lot of adjusting this season. From losing his starting job to Marcus Smart, reduced touches and having to step up offensively in Irving's absence, he's managed to deliver a solid regular season up until this point.

Sure, Brown has a handful of duds sprinkled in between the games where everything seemingly clicks so naturally, however, the bright spots have all of a sudden been clouded by the issues that have plagued the Celtics on and off the court. Beneath Kyrie Irving (31) and Jayson Tatum (14), no other Celtics player has more 20-plus point performances than Brown, who recorded his tenth Wednesday night.

He's also shooting 54 percent throughout the past four games, while the Celtics have now won seven of their last eight.

So, what's been the key to Brown's success?

"It's great. It's a blessing. You come out, play the game of basketball. Definitely, a game I love to play. You're out there getting easy buckets; you're winning and you're having fun. All of that is a part of it. It means a lot. I'm having fun out there."

Brown joined one of six Celtics players who scored in double figures. Jayson Tatum scored 20 points to go with his 5 rebounds, Terry Rozier filled in for Kyrie Irving (hip) for the second straight game and finished with a double-double (17 points, 10 assists) and Marcus Morris added 15 points and pulled down 7 rebounds.

We'll see if Brown can keep the hot hand flowing in New York, where the Celtics will take on the Knicks Friday night.