How a potential Grizzlies rebuild could benefit the Celtics 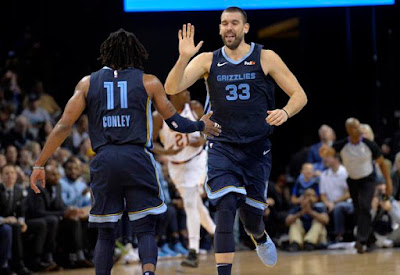 The Memphis Grizzlies will reportedly begin to entertain trade offers for All-Star Marc Gasol and Mike Conley, with the league's trade deadline just two weeks away.

According to ESPN's Adrian Wojnarowski, who first broke the story on Tuesday, the Grizzlies for the first time are considering moving on from their franchise players Gasol and Conley to start a full rebuild.


For first time, Memphis will begin listening to trade offers on franchise stars Marc Gasol and Mike Conley, league sources tell ESPN. Memphis has reached a crossroads and is preparing to weigh deals involving one or both of its cornerstone veterans. Story soon on ESPN.
— Adrian Wojnarowski (@wojespn) January 22, 2019


In case anyone has forgotten, the Celtics are owed a future first-round pick from the Grizzlies, when Danny Ainge traded Jeff Green to Memphis back during the fire storm sale season that was the 2014-15 campaign. The pick, which if conveyed to Boston this summer, is Top-8 protected and the Grizzlies will have a decision to make on either overhauling their roster now to increase their chances to keep this year's pick or simply staying pat and risk losing the pick to the C's anyway.

The Celtics could still benefit if the pick doesn't end up in Ainge's hands come June, as the aforementioned future-first round pick from Memphis is Top-6 protected in 2020 and completely unprotected in 2021.

The Grizzlies at 19-28, currently find themselves second to last in the Western Conference standings and seven games out of the playoff picture after starting off this season 12-5. Memphis, who lost to the Celtics this past Friday at the TD Garden, have dropped 12 of their last 13.

It's no secret that Ainge is keeping a close eye on not only the Grizzlies, but also the Sacramento Kings, who despite their 24-24 record, they owe the Celtics a first-round pick this year only if it's not No. 1 overall. But the way the young guns are playing out in Sac-Town and fighting for a playoff berth, what was once considered a guaranteed Top-5 selection coming to Boston, now looks like it could be closer to a top-10 or higher.

With many Eastern Conference teams setting anchor at the bottom of the league so far this season, Ainge still has the potential of collecting all three picks owed (the Clippers could also convey a non-lottery first rounder, top-13 protected) that could be used for a future deal to acquire maybe another superstar or simply add young depth to an already talented roster.

The Celtics are projected to collect picks No. 13 (Kings), 19 (Clippers), and 24 (their own) based on the current standings entering Wednesday night.

This year's NBA trade deadline is on February 7 at 3 PM EST.