Rumor: Celtics not on Anthony Davis' list of preferred destinations 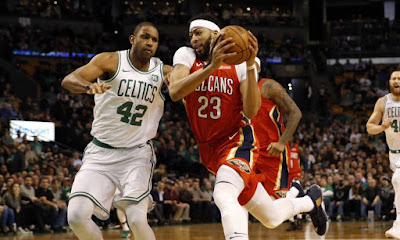 While Anthony Davis has decided to make it interesting less than two weeks away from the NBA trade deadline, making a request for the New Orleans Pelicans to move him, the Celtics apparently are not on a short list of possible destination for the All-Star center.

According to Chris Haynes of Yahoo Sports, Boston is "not a top target" for Davis, following his trade request.


"There's a growing belief of uncertainty that Kyrie Irving will re-sign with Boston," Haynes reported.

Davis made headlines Monday morning when it was first reported by ESPN, that his agent Rich Paul told the Pelicans his client would not sign a supermax extension of five-year, $240 million to remain in New Orleans this summer and demanded to be traded.

The Pelicans released a statement later in the afternoon regarding their franchise superstar.


"This past weekend, Anthony Davis' representatives informed us that Anthony does not wish to sign a contract extension with our team and subsequently has requested a trade. Although we are disappointed in this decision, our organization's top priority is to bring an NBA championship to our city and fans and build our team for long-term success.

"Relative to specific talks of a trade, we will do this on our terms and our timeline. One that makes the most sense for our team and it will not be dictated by those outside of our organization. We have also requested the League to strictly enforce the tampering rules associated with this transaction."

Though theres is no rush for the Pelicans to make a move, the Celtics would not be in the running to trade for Davis before the February 7 deadline because Irving and Davis both signed designated rookie extensions and league rules prohibit a team to acquire two players with such contracts under the current collective bargaining agreement.

Boston would be allowed to make a deal with New Orleans in the offseason once Irving opts out of his current contract to become a free agent by July 1.

Irving has a $21.3 million player option that he will reportedly decline in order to re-sign and stay in Boston long-term. The All-Star point guard announced in October, prior to the start of the regular season, his intention to re-up with the Celtics come this summer.

Irving, who sat out against the Nets Monday night with a hip injury, is having an MVP type of season averaging 23.7 points to go along with career-highs in assists (6.9) and rebounds (4.8). He's heading to his sixth NBA All-Star game, while being voted as a starter for the second straight year.

If the Celtics are unable to land Davis and Irving were to walk come July, that would be a major blow to a franchise, who had so much promise to be title contenders with a mixture of superstar veterans and young talent for years to come.

It should be interesting to see the many trade offers for Davis that will be made by rumored teams including the Lakers, Clippers, Spurs, Bulls, Raptors and Knicks.