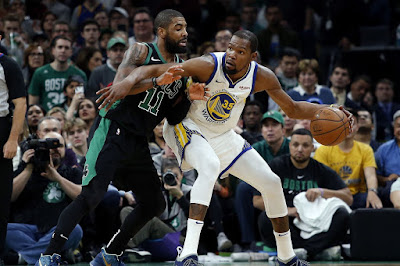 The Celtics entered Saturday night winners of 10 straight at TD Garden, the longest home streak of any team in the NBA this season, before coming up short in a 115-111 loss to the Golden State Warriors.

Kevin Durant led the Warriors with a game-high 33 points and 9 rebounds, while Stephen Curry added 24, hitting 6-of-12 from beyond arc and 7-of-15 overall, lifting Golden State to their 10th straight win.

Klay Thompson, who finished with 21 points, hit his only two free throws of the night with 46 seconds remaining in the final frame to put the Warriors ahead for good.

Boston had three chances on three straight possessions to either tie or take a lead when Marcus Smart (12 points) rimmed out a 3-pointer, Irving shot a nine-foot airball from the baseline and Marcus Morris missed a 3 from the left elbow.

In a game that featured 21-lead changes, the Celtics, who trailed 113-111, almost caught another break when Draymond Green missed two free-throws with 6.2 seconds left to ice the game, only to grab his own rebound.


"We played hard but we just didn’t make enough plays at the right time we needed to beat the best," said Jayson Tatum, who finished with 20 points. "You see how tough it is to win a game against the best. You almost gotta be perfect."

The Warriors DeMarcus Cousins played in his fourth game since returning from an Achilles injury, finishing with 15 points and 8 rebounds in 24 minutes, spoke about the TD Garden crowd.


"It was amazing, I've missed this feeling for a long time," said Cousins. "The atmosphere was incredible, the fans were into it from start to finish. I enjoyed it, it was a lot of fun.

The Celtics are now 30-19 on the season after getting their five-game win streak snapped and will look to get back on track when they host the Brooklyn Nets on Monday.

The Celtics shot 15-of-40 from 3, while Golden State hit 12-of-33 from behind the arc. Boston made 41.4 percent of their overall shot attempts and the Warriors hit 44.6 percent from the field.

Kyrie Irving becomes the first Celtic since Larry Bird (1986-87 season) to have at least 11 double-doubles with points and assists.