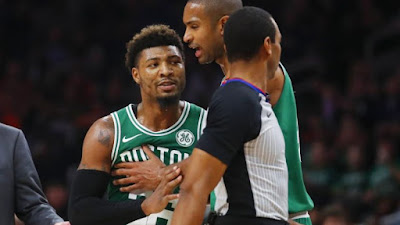 A gritty, hard-nosed defender who does the dirty work and doesn't take crap from anyone.

However, the only problem with having a player like that is he's prone to go off the handle and into the deep end from time to time and Saturday night was one of those times.

Smart, who earned a technical foul early in the third quarter of the Celtics' 113-105 win over the Hawks, got into a verbal exchange with Hawks forward DeAndre Bembry later in the quarter while positioning himself for a jump ball, when he was handed his second technical foul. Smart was ejected from the game but decided to get his money's worth before he left the court by charging towards Bembry after the two were separated.

Smart swung a punch towards Bembry, which didn't land in the midst of Hawks and Celtics players that were caught in between, before Smart was eventually separated for good and made his way to the locker room.


When Celtics head coach Brad Stevens was asked about the incident, he said he would have to watch the tape before commenting on it but did say he thought Smart deserved the ejection. Smart declined to speak with the media.

Now, we wait and see if the league will come down on Smart with a suspension before Monday's game against the Heat.