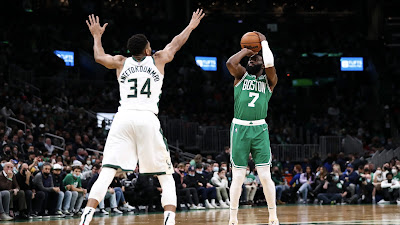 While the Celtics are set to face the Milwaukee Bucks in round-two of the Eastern Conference playoffs, Ime Udoka gave some important injury updates ahead of Game 1.
According to the first-year coach, Robert Williams, who returned in Game 3 against the Brooklyn Nets from a partially torn meniscus in his left knee, has been worker harder than anyone this past week to get back into game shape.

"He's been doing more than the other guys, with that time that he missed, said Udoka Saturday afternoon in his post-practice presser. "We had a good hard one on Thursday, so he got a good amount of scrimmaging in there, but he's getting some extra work as well."

Williams appeared in Game 3 and 4 last series on a minutes restriction, while averaging 2.5 points, 3.5 rebounds in 15.5 minutes off the bench.
As for Jaylen Brown, Udoka said he's "doing well" and things are "pointing in the right direction" when it comes to dealing with any hamstring issues. Brown also spoke to the media and assured that he's "ready to roll" for Game 1 without any limitations.

"I'm good. I went through some tests this week, got some treatment. Should be ready to roll for tomorrow, said Brown during his post-practice comments. "Anytime you're dealing with a lingering injury you want to be more cautious and careful, but I think I'm okay."

Brown was a crucial part of the Celtics sweeping the Nets last week, averaging 22.5 points, 5.3 rebounds, 4.3 assists, and 2.5 steals while shooting 49.3% from the field. He also led the team in fourth quarter scoring with 8.5 points on 60.9% from the floor, including 57.1% from deep.
Earlier this week, Celtics president of basketball operations said the team had "some concerns" with Brown possibly re-aggravating a previous hamstring injury after the guard said there were some issues he felt in the second half of Game 4 against the Nets.
With the long layoff, Brown was able to rest and treat any potential lingering hamstring tightness he may have had following last Monday's win.
Milwaukee on the other hand, will be without their All-Star Khris Middleton, who is expected to miss the entire series with a Grade 2 MCL sprain in his left knee.
The Celtics host the Bucks in Game 1 today at TD Garden and ABC has the tip-off at 1:00 PM ET.
Joel Pavón
Follow @Joe1_CSP