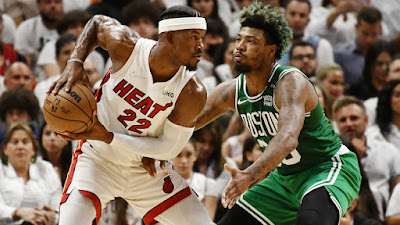 The Celtics beat the Miami Heat in a 127-102 blowout win to even the Eastern Conference Finals best-of-7 at 1-1.
Despite sitting out of Game 1 with a mid-foot sprain, Marcus Smart proved to be the best player on the floor in Game 2 just when the Celtics needed him the most and avoid a 2-0 series deficit.

"It was very frustrating because I couldn't get out there and help my teammates. I had to sit there and watch us struggle the way we did. It was very painful," Smart said Thursday night to reporters. "For me today, it was come out and be as aggressive as you can and don't let the same thing happen."

Smart had arguably his best performance of his career in the postseason, as he finished with 24 points, including 5-of-12 from deep, nine rebounds and 12 assists, to go along with three steals, a block and only one single turnover. While playing on an injured foot, which he admits is still sore, Smart also became the first in franchise history to record 20 points, 10 dimes and hit five 3-pointers in a playoff game.

"I hoped I could get back," Smart said during his postgame presser. "We didn't want to risk it Game 1. But I told myself, 'Game 2, you playin'. I don't care how much you're hurting.'"

If most haven't noticed by now, Smart isn't just the Defensive Player of the Year, but has also turned into the point guard he always knew he could be. In Game 2 the Celtics were 12-of-15 from the field and 6-of-8 from 3 off of passes from Smart, which is an elite level, if not damn near perfect for a floor general that many didn't think he could handle the role when given an extension last summer.

"It feels great," he said of the trust the team has put in him as a leader on the floor. "That's who I am. The whole world is seeing what I can do at the point guard position."

Smart's 24 points -- along with Jaylen Brown, who also netted 24 points -- was tied for the third most points scored in Game 2 behind Jimmy Butler at 29 and Jayson Tatum with 26. The longest tenured Celtic only made 8-of-22 from the field but it was a mix of tough shots in the paint and step back jumpers that helped improve his team to 4-0 after a loss so far this postseason and when he also scores 20-plus points. Boston is now 6-0 when Smart attempts more than 12 shots, according to StatMuse.
Still, we can't forget about Smart on defense which held Miami to 3-of-11 from the floor and two turnovers when he was the primary defender. Butler, who was the hero of Game 1 with 41 points on 12-of-19 shooting, was limited to nine points when Smart guarded him for 35 plays in Game 2, per Second Spectrum.

"It wasn't just me. I had some help from everybody. We all threw some guys at him, and we all had a chance. That's what it comes down to," Smart said. "My assignment was just to make everything tough for him. We knew he was going to hit some shots. If he did, he had to work for them. That's just where I came in."

Smart, who was one rebound shy of a triple-double in Game 2, is making yet another case for himself that the Celtics are just clearly better when he's on the floor -- a true testament to how this team's turnaround continues to impress, especially the deeper they go into the playoffs.

"The beauty of this team is that we got to play through adversity this season," Smart noted during his postgame comments. "We just wanted to come in and be the harder playing team tonight."

The Celtics look to take a 2-1 lead when they host the Heat in Game 3 Saturday night, as ABC has the tip-off at 8:30 ET.
Joel Pavón
Follow @Joe1_CSP