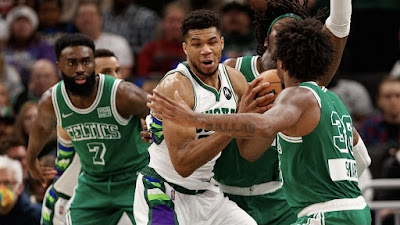 The Celtics will face the Milwaukee Bucks in the second round of the Eastern Conference Playoffs, after the reigning NBA champs closed out their best-of-7 series against the Chicago Bulls Wednesday night 4-1.
The NBA released the semifinals schedule, which is set to get underway at TD Garden Sunday afternoon in a 1:00 ET matinée tip-off. This is the third time over the five years that the Celtics and Bucks have met in the playoffs.

Save the date 🗓 ☘️ pic.twitter.com/jzELceP4lg


Boston, who dispatched the Brooklyn Nets in a four-game sweep Monday night, finished 2-2 in their regular season series against Milwaukee -- with the Bucks averaging 115.0 points on 47% shooting per game and the Celtics putting up 118.3 points on 48% from the field per contest.
Jayson Tatum was the Celtics leading scorer with 31.3 points and shot 44% from deep (three games) against the Bucks, while Giannis Antetokounmpo averaged 28.3 points, 10.3 rebounds in three games against Boston.
While both teams finished 51-31, the Celtics won the fourth tie breaker by having a better record against the East's playoff teams (20-13 over 17-16). They clinched the No. 2 seed and homecourt in the second round by beating the Memphis Grizzlies on the final day of the regular season. Milwaukee meanwhile, elected to sit their starters in the regular season finale to which some believed they preferred to grab the No. 3 seed and avoid a first-round matchup with the Nets.
On Tuesday, coach Ime Udoka spoke about the Celtics' confidence and how they are not dodging any teams in the playoffs.

"We're a basketball team, not a track team," Udoka said in his post-practice presser. "We're not running from people."

After nearly seven days off, the Celtics will host Game 1 Sunday on ABC and Game 2 come Tuesday on TNT.
Joel Pavón
Follow @Joe1_CSP