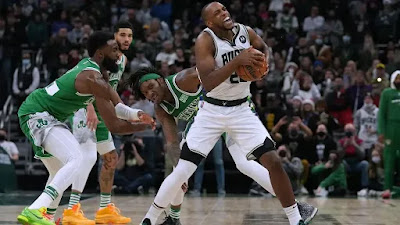 The Milwaukee Bucks will reportedly be without Khris Middleton for the entire second-round against the Celtics after suffering a Grade 2 MCL sprain in his left knee, according to The Athletic's Shams Charania.
The All-Star wing sustained the injury in Game 2 last week of their first-round best-of-7 matchup against the Chicago Bulls ahead of the Bucks closing out the series, 4-1 Wednesday night. Middleton's recovery could potentially keep him sidelined throughout the Conference Finals if Milwaukee were to make it that far.

The left MCL injury of Bucks All-Star Khris Middleton is a Grade 2 sprain and he is expected to miss the entire second-round series vs. Celtics, sources tell @TheAthletic @Stadium. The recovery of Grade 2 MCL places a potential Conference Finals in jeopardy for him as well.


ESPN's Adrian Wojnarowski also reported that Middleton would be re-evaluated in two weeks, but the Bucks don't expect him to play even if he's cleared to practice.

"Certainly he’ll get that re-evaluation at the 14-day, two-week point next week, but I’m told that injury is expected to keep him out longer than that," Wojnarowski said Wednesday afternoon on ESPN's The Jump. "There's not a sense that he's going to get re-evaluated at two weeks and all of a sudden be back at practice and be ready to play. That's a benchmark in this process, but the Bucks certainly -- they are on the cusp of getting past the Bulls here -- they may have to get through another series, a conference semifinal, before they may have the opportunity to get Khris Middleton back in this season."

The Celtics, fresh off a four-game sweep of the Brooklyn Nets, will have one less scorer to defend in Middleton, who's been a killer in big games against Boston in the past and the No. 1 shooter to take the pressure off of Giannis Antetokounmpo -- especially in crunch time. Players like Jrue Holiday and Grayson Allen will likely step-up their offense for Milwaukee in Middleton's absence.
Game 1 between the Celtics and Bucks second-round best-of-7 series will tip-off from TD Garden Sunday afternoon at 1:00 PM ET on ABC.