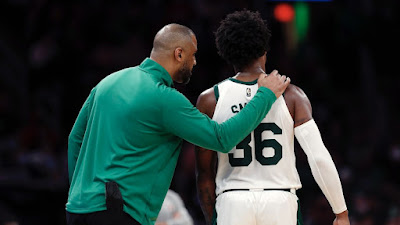 Marcus Smart is listed as questionable ahead of tonight's pivotal Game 5 between the Celtics and the Miami Heat.
Boston was able to pull off a 102-82 win in Game 4 without Smart, who suffered an ankle sprain and was ruled out just hours before tip-off.
Robert Williams is also listed as questionable, despite playing Monday, with the same left knee soreness that kept him sidelined of the C's Game 3 loss Saturday night.
According to coach Ime Udoka, "both are feeling better" as of this morning, despite Smart experiencing some pain in his ankle still.

"Both (are) feeling better," said the Celtics coach after Wednesday's shootaround. "Marcus still has some swelling and pain; soreness. They will test it out pregame and see how they feel."

Following Game 4, Udoka revealed that Williams would most likely be day-to-day for the remainder of the postseason, even after a 12-point, nine-rebound performance in his return.
Per ESPN's Adrian Wojnarowski, Williams will test his surgically repaired knee in warmups to see if he can give it a go. The All-Defensive Second-Team honoree was key in keeping Bam Adebayo and P.J. Tucker out of the paint Monday in Game 4, limiting both to single digit scoring in the Celtics' blowout win.
Miami has also had their fair share of players being in and out of the lineup in this series due to injuries, something Udoka says is not unusual, especially this time of year, with two teams not just battling one other but also dealing with aliments.

"At this time of year, injuries aren't uncommon," Udoka noted. "The amount of guys that are on the questionable list from game to game is kind of alarming. But, we've been dealing with it, especially with the Rob situation, for a while. Like I said, he’s pretty much day-to-day the rest of the playoffs. So, it's something we have to manage and sort of workaround. They're going through their own thing and got quite a few guys banged up as well. Sometimes luck plays into it and health is a big part of that.
"So, we have to make do with what we have. Both teams have done that and won with players out as we have throughout the playoffs."

The Celtics and Heat tip-off in Game 5 of the Eastern Conference finals tonight, beginning at 8:30 ET on ESPN, as this best-of-7 is tied 2-2.