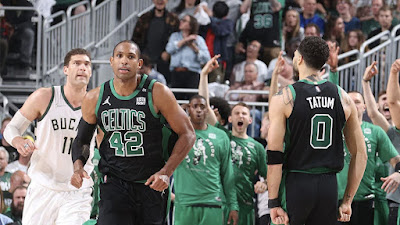 The Celtics got the much needed road win to stay alive by beating the Milwaukee Bucks 116-108 in Game 4 Monday night at Fiserv Forum, to tie this second-round series 2-2.
Al Horford netted a playoff career-high 30 points on 11-of-14 shooting, including 5-of-7 from deep, to go along with eight rebounds -- going over the 20-point mark for the second game in a row and third time this postseason.

"I usually just kind of go about my business," said Horford during his postgame presser. "I do get excited, but I guess you kind of pick your spots, your moments. This was an emotional game."

Jayson Tatum bounced back from a horrible 4-of-19 display from Game 3, which also saw him go 0-of-6 from 3, to finish with 30 points on 11-of-24 from the field in Game 4. The forward also grabbed 13 rebounds and dished out five assists.

"I played a terrible Game 3 and we almost had a chance to win," Tatum said during his postgame comments. "That was really the toughest part, was knowing that. I was really eager to get back and ready to play."

Both Horford (16 points) and Tatum (12 points) led the Celtics fourth quarter charge of outscoring the Bucks 43-28 in the final frame to even this best-of-7 matchup at two-games a piece.

"We love Al," said Marcus Smart, who had 18 points and eight assists. "Best vet we've ever had. Best vet I've ever had. He comes in, never changes whether things are going bad or good. He's going to be him, and nine times out of 10, it's going to work out in our favor."

While Jaylen Brown dealt with foul trouble and sat out half of the fourth period, he still managed to put up 18 points on 5-of-11 from the floor for Boston, who was playing without Robert Williams (left knee soreness).
Giannis Antetokounmpo led all scorers with 34 points on 14-of-32 shot attempts, 18 rebounds and five assists. Brook Lopez added 17 points, seven rebounds and Jrue Holiday chipped in 16 points on 5-of-22 from the floor, including 1-of-6 from 3-point territory for Milwaukee, who led most of the night.
Boston trailed 48-47 at the break, while it seemed like Milwaukee was dominating, especially after a powerful dunk by Anteteokounmpo resulted in a stare-down of Horford with 7:23 left in the second quarter -- which drew a technical foul on the All-Star forward.

"I don't really know what he said to me, but the way he was looking at me and the way he was going about it, really didn't sit well with me," Horford said after the win. "At that point, I think just something switched with me in the game."

The Celtics were behind by as many as 10 in the third and did get any closer than four the rest of the quarter. Horford capped a 10-0 run to start the fourth on a game-tying and-1 dunk -- picking up his own technical foul in the process because his left arm landed on Antetokounmpo's face as he was coming down and let out the biggest scream while pumping his fists.
Horford's go-ahead 3 put the C's up for good (95-94) with 5:09 left to play to start a 14-2 run on their way to scoring 24 of the game's final 38 points and holding Antetkounmpo to 3-of-7 from the floor.
After hitting just 40% of their shots through the first three quarters, Boston went 16-of-19 overall and 4-of-5 from 3-point range in the fourth period, while Horford was 6-of-6 and Tatum 5-of-6.

"We all understood the importance of this game," Horford said. "We felt at the end of Game 3 we were in position to win the game, and we didn't. I was just really locked in. I understood the moment, what we needed to do as a group. I really just did whatever it took tonight. It was one of those type of nights."

The Celtics, who obviously weren't happy about how Game 3 ended in a 103-101 loss on a final Horford banked layup that was just a quarter of a second too late of the final buzzer, return to the TD Garden on Wednesday with an opportunity to grab a 3-2 series lead. TNT will have the tip-off of Game 5 at 7:00 ET.