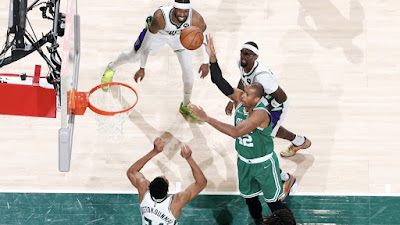 The Celtics' one-point lead with less than two minutes left was short-lived, as they fell to the Milwaukee Bucks 103-101 Saturday night at Fiserv Forum in Game 3 and trail 2-1 in this best-of-7 series.
Jaylen Brown finished with 27 points on 8-of-16 from the field to go along with 12 rebounds, while Al Horford recorded another playoff double-double of 22 points, 16 rebounds and five assists. Derrick White chipped in 14 points off the bench, but Jayson Tatum struggled on 4-of-19 shooting -- including 0-of-6 on 3-point attempts -- scoring only 10 points.

"I was probably just thinking a little too much," said Tatum in his postgame presser. "Obviously I expect to play better. I'm gonna be ready Monday trying to get a win. I'm not gonna make it about me. Nothing like that. I gotta be better. I know that. My teammates know that."

Giannis Antetokounmpo led the Bucks with 42 points (16-of-30), 12 rebounds and eight assists, after shooting 38.5% in the first two games of the series. Jrue Holiday added 25 points on 11-of-30 from the floor, while Brook Lopez notched a double-double of 13 points and 10 rebounds.
The Celtics trailed 80-67 to start the final frame, before using a 18-10 run to get within five with 7:36 remaining. Boston grabbed its first lead of the second half on a pair of made free throws by Brown with 1:49 left to play.
The Bucks failed to score on the next possession three different times following a Grant Williams and Brown block on Holiday and Antettokounmpo respectively before a shot clock violation gave the C's the ball and a 100-99 advantage.
Back-to-back missed 3s by Brown and Marcus Smart led to an Antetokounmpo basket on the other end, followed by another missed Brown shot and a 12-foot floater by Holiday after a controversial no charge call put the Bucks ahead 103-100 with 11.2 seconds on the game clock.
Holiday fouled Smart while he was attempting a 3-pointer with 4.6 seconds left, but it was determined that it was a non-shooting foul and Smart would be given two free throws instead of three, with Milwaukee already in the penalty.
Smart made the first free throw then missed the second attempt intentionally -- going off the backboard hard before hitting the rim -- grabbing the rebound but missed the putback. Robert Williams charged towards the hoop and threw the ball off the glass. Horford put up another attempt on the right side that also went off the glass, before he got his own rebound and banked it in, only the final shot came after the buzzer sounded.

THE @BUCKS GET THE STOP AT THE FINAL BUZZER TO WIN GAME 3! pic.twitter.com/bmagSiNuxC

Smart, who returned from a thigh contusion that forced him to miss Game 2, spoke about the final play following the loss.

"Missed it perfectly," Smart said during his postgame comments. "Nobody was ready, (but) our guys were. Got it up on the rim. We had a few chances at it. Just didn't work out for us."

"You can clearly see it," Udoka said. "I saw it in person, but also on the film. I just went and looked at it. It's a shot. He's curling into his shot. He's getting fouled on the way up. Bad missed call."

Game 4 is scheduled for Monday night in Milwaukee, as TNT will have the tip-off at 7:30 ET.