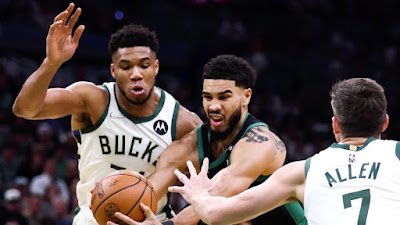 The Celtics were brought back down to earth after a 101-89 Game 1 loss to the Milwaukee Bucks Sunday afternoon at TD Garden.
Jayson Tatum scored 21 points, including 4-of-9 from 3, to go along with six rebounds and six assists. Al Horford was also 4-of-9 from deep on his way to record a 12-point, 10-rebound double-double, but it didn't get much better for the C's -- who trail in this best-of-7 semifinals 1-0 after coming off a four-game sweep of the Brooklyn Nets nearly a week ago in round one.

"Offensively, not our best night. I thought we guarded well enough," Celtics coach Ime Udoka said. "To lose a 12-point game when we shot so poorly bodes well for us. In a way it's good to get this dud out of the way, offensively."

Jaylen Brown had 12 points and nine rebounds, but also turned the ball over seven times, while Marcus Smart added 10 points and six assists. Boston went 18-of-50 from behind the 3-point arc and shot 33.3% overall as a team. Both Tatum and Brown combined to shoot 10-of-31 from the field.
Giannis Antetokounmpo finished with his second career playoff triple-double of 24 points -- despite shooting 9-of-25 from the field -- 13 rebounds and 12 assists. Jrue Holiday led all scorers with 25 points, nine rebounds and five assists. Bobby Portis chipped in 15 points and 11 rebounds for the defending NBA champs, who have won four in a row.
The Celtics led by as many has eight in the opening quarter, but the Milwaukee used a 10-0 run to end the first that eventually turned into 56-46 advantage at the break, after Antetokounmpo scored eight straight to close out the half.
Smart was seen in obvious pain with 1:23 remaining in the second period when he walked off the floor and into the locker room dangling his right arm. Team officials said the veteran guard had a shoulder "stinger" and a right quad bruise, but did return to start the third quarter.
Boston was able to get within seven heading into the final frame before the Bucks outscored them 16-8 to start the fourth -- including an Antetokounmpo's alley-oop to himself that put Milwaukee ahead 94-78 with 6:18 left to play. The home team never recovered after giving up their only lead early in the game, playing the final 37-plus minutes from behind.

"This one should hurt a little bit," Horford said in his postgame presser. "We have an opportunity now to learn from this game, see how we can be better as a group and come out and do that Tuesday."

This was the first double-digit loss for the Celtics since Feb. 27 against Indiana Pacers (21 points), after winning 26 of their last 32 regular season games and being the only team not to lose in the first-round.
The Celtics will look to even up this series Tuesday night when they host the Bucks in Game 2, TNT has the tip-off at 7:00 ET.