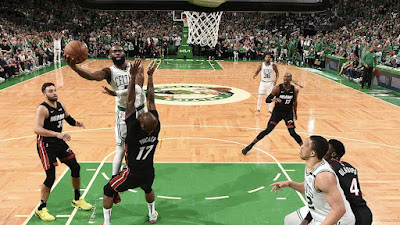 The Celtics nearly pulled off a 26-point comeback in Game 3, as they fell to the Miami Heat 109-103 Saturday night at TD Garden to trail the Eastern Conference finals 2-1.
Jaylen Brown led all scorers with 40 points on 14-of-20 shooting to go along with nine rebounds, but also committed seven turnovers. Al Horford recorded a double-double of 20 points and 14 rebounds, while Marcus Smart -- who looked like he rolled his ankle and went to the locker room in the third quarter only to return minutes later -- finished with 16 points and seven assists before fouling out.
Jayson Tatum struggled offensively with 3-of-14 shooting, including 1-of-7 from behind the arc to total only 10 points, while also turning the ball over six times for the Celtics -- who were also without Robert Williams (left knee soreness).

"Six turnovers, and no field goals in the second half - that is unacceptable," Tatum said in his postgame presser. "Honestly, I've got to play better. I feel like I left the guys hanging tonight. That's on me."

The Celtics All-Star also left the game briefly to what appeared to be a shoulder injury or a stinger more than halfway through the fourth, but did come back in the final minutes when Boston cut their deficit to one.

"My neck got caught in a weird position," Tatum said. "Obviously, I went down and felt some pain and discomfort in my neck and down my arm. I went to the back, got it checked on, and started to gain some feeling back and got it checked by the doctors and ran some tests and decided to give it a go."

Bam Adebayo finished with 31 points, 10 rebounds and six assists, while P.J. Tucker added 17 points, seven rebounds for Miami, who were without Jimmy Butler (knee inflammation) for the second half. Max Strus had 16 points and Kyle Lowry returned after a four-game absence to chip in 11 points, six assists.
Boston trailed 39-18 to start the game and the deficit grew to 62-37 before a 10-0 run to close the second period had the C's down 62-47 at the break.
The Celtics cut it to 10 on a made 3-pointer by Smart once he checked back into the game after returning from the locker room to a roar from the Garden crowd with 6:04 in the third. Miami would score 15 of the next 25 points to end the quarter and bring a 87-72 advantage into the final frame.
A 9-2 spurt by Boston got them within single digits but the Heat pushed their lead back up to 93-80. Brown scored 10 straight points as part of a 12-0 run by the Celtics to make it a one-point game with 2:40 left to play.
Tatum's return from the locker room was met by Miami's next seven unanswered points to put it away for good, as they never trailed once all night in response to a blowout loss at home in Game 2.

The Celtics' 24 turnovers were converted into 33 points for the Heat, who also forced 19 steals -- one shy of an NBA playoff record.
Boston will look to avoid a 3-1 hole, as Game 4 is scheduled for Monday night at 8:30 ET on ABC.