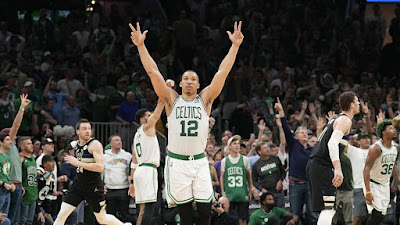 The Celtics clinched their second-round series after losing Game 5 by winning the next two and eliminated the Milwaukee Bucks Sunday afternoon in a decisive seventh game to advance to the East Finals.
The saying that goes "not all heroes wear capes" proved to be accurate, as Grant Williams stepped up to lead all scorers with a career-high 27 points to help lead the Celtics to beat the Bucks 109-81 in Game 7.
Despite early struggles in the first quarter at TD Garden, Williams continued to shoot even after going 1-of-4 in his first five attempts from deep, as head coach Ime Udoka urged him to keep shooting.

"I told him 'let it fly.' They're disrespecting you more tonight than earlier in the series. And that was a plan for him and other guys," said Udoka in his postgame presser. "Really shifting and making them try to beat us. You saw it on the first one that he made and then he missed a few and got a little hesitant. And I basically said, 'shoot the ball like, what else can you do?'"

Williams ended up with a career-best 18 three-point attempts and he hit seven of them, matching an NBA record for the most made 3s in a Game 7 alongside Stephen Curry and Marcus Morris Sr. While Russell Westbrook still holds the record for most 3-pointers attempted in a playoff game at 19, Williams made history by attempting the most 3s in a Game 7.
Jayson Tatum spoke about Williams leading the the Celtics in overall shot attempts and coming through when the team needed him most in a winner take all closeout game, but also told his teammate not to get use to shooting at such a high clip.

"He took more shots than anybody on the team," said Tatum during in his postgame comments. "I think that's a first. He took 18 threes. I told him, 'don't get used to that.' But obviously tonight we needed it. He came up big, played amazing, had 27 points. And in the playoffs you need that. You need the guys coming off the bench to be a star in a row. And you know, Grant won us a playoff game tonight. A Game 7. I'm extremely happy for him."

Jaylen Brown was asked what would he have said if someone told him Williams would take 18 3-pointers before Sunday's bout and the Celtics wing chuckled before giving his answer.

"I would've called you a liar for sure," Brown said in his postgame conference with the media. "Hey man, that's what they were giving us. It was almost like they were using that defender just to stop me and Jayson from getting to what we wanted. So we had to keep making the pass and he was wide open. And we trust all our guys. Grant is a good shooter. And he came through, man, he got them up. Call him 'Grant Curry' now."

Williams, a 41.1% 3-point shooter in the regular season, was given that shot from behind the arc by the Bucks' defense all game Sunday and for most of the series. Udoka and his teammates' confidence in him was hard to ignore, according to Williams.

"It's tough to get in your own head when your entire team, like 15 people walk up to you and say, 'let it fly, keep shooting.' So, for me, it was just like, 'alright, they're encouraging it, might as well take advantage.' So each one, as time went on, got more comfortable, kept shooting," said Williams. "I guess Ime made a joke, I shot 18, and that's probably the most 3s I've shot in my life in a single game."

In an elimination game at home, Williams didn't just have a great offense performance but he also defended well on the other end. He contested shots, coming up with two blocks and grabbed six rebounds in the win.
Williams and the Celtics are set to take on the Miami Heat, as Game 1 of the Eastern Conference Finals is scheduled for Tuesday night at 8:30 ET on ESPN.
Joel Pavón
Follow @Joe1_CSP