Jaylen Brown, Celtics one win away from NBA Finals berth 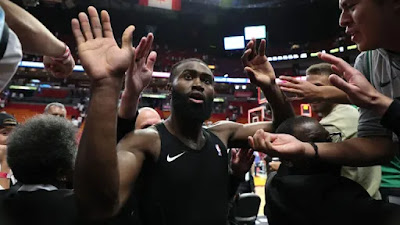 The Celtics are one win away from a trip to the NBA Finals after their 93-80 win over the Miami Heat in Game 5 Wednesday night and a 3-2 Eastern Conference finals lead.
Jaylen Brown lead all scorers with 25 points after only netting six in the first two quarters and having four turnovers, as the C's trailed 42-37 at the break.
When asked what was the difference between the first and second half Jaylen Brown, Ime Udoka answered with a very simple, "he didn't turn it over," before pausing and awaiting the next question.
In the two losses to the Heat in this series the Celtics have committed a combined 40 turnovers that were converted into 52 points for Miami. In Game 5, Boston had 10 at halftime and limited themselves to only four in the final two quarters.
In the case of Brown, his 19 points and zero turnovers were the difference in the second half as the Celtics outscored the Heat 56-38 and held them in the 80s for a second straight game.

"Just had to get settled in, keep being aggressive, stop turning the ball over," Brown said after the win.

Boston opened the third quarter on a 24-2 run and followed that up with a 14-2 spurt to start the fourth to which Brown knocked down three-straight 3-pointers to give the Celtics a 23-point lead, before putting the final nail in the Heat's coffin with powerful one-handed slam over Bam Adebayo, who literally jumped out of the way in mid-air with 5:19 left to play.

"Any time Jaylen is on the second side, he's lethal -- whether it's the catch-and-shoot or pull-ups," Udoka said during his postgame comments. "We found him coming out of timeouts for some quick drives that got him going.
"Whether he takes a tough pull-up, some guys are tough shot makers, and he's one of them. We'd rather have him do that 100 percent of the time rather than turn the ball over. We just told him to get shots up, see the crowd, get off the ball, but be aggressive when we need it and he did it."

Despite some ugly moments for Brown in the first half of Game 5, Brown stepped up when the Celtics needed him most and the team is now on the brink of NBA Finals berth. The All-Star wing, who has been to the conference finals there on three different occasions prior to this season, knows what's at stake when it comes to finally getting over that hump

"This is a great opportunity," he said. "Leave everything on the floor. You don't want any feelings of regret. We got an opportunity to do something with this group that's special, so let's not take that for granted.
"At the same time, you know, just breathe, relax. Sometimes it can be a little bit too tense. We know how important these moments are. But just come out and play our game and we'll be fine."

The Celtics will have a chance to put away the Heat in Game 6 tonight and advance to the NBA Finals where the Golden State Warriors await, for the first time since 2010. Tip-off from TD Garden is at 8:30 ET on ESPN.