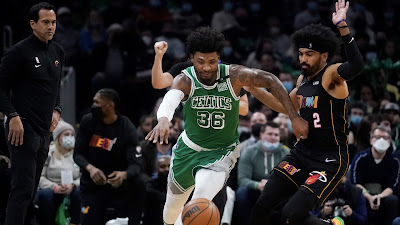 Marcus Smart has been downgraded to out with a right midfoot sprain and Al Horford is in Health and Safety protocols, as the Celtics will be down two starters when they take on the Miami Heat in Game 1 of the Eastern Conference Finals tonight.
According to C's coach Ime Udoka, Smart sustained the injury in the 109-81 Game 7 series clinching win over the Milwaukee Bucks Sunday afternoon.
An MRI on Monday came back clean and Smart was listed as questionable, but he still had some swelling Tuesday morning and his availability was based on how the foot reacted to treatment throughout the day.

"He took a pretty bad fall, got bent up. He has a midfoot sprain, and it's pretty tender and sore right now," Udoka said during his presser Monday afternoon ahead of the team's flight to Miami. "We'll get him round the clock treatment and right now he'll be listed as questionable."

Meanwhile, Robert Williams has been made available without minutes restrictions for Game 1 and with Horford sidelined for now, the Celtics will need all the help they can get in the frontcourt after their starting center missed the last four straight games (three of them with a bone bruise in his right knee). While he was available to play in Game 7 against the Bucks, Time Lord received a coach's DNP, as Grant Williams -- who started in his place -- went off for a game-high 27 points on 7-of-13 from deep.

"Rob is available, just like he was last night. I mentioned he'd be on a needed basis, and he's available, no minutes restriction," said Udoka. "I'm always going to be a little bit cautious with guys coming off a layoff without touching the court, but it's a little bit different starting a new series as opposed to being injected into a Game 7 or Game 6 or whatever the case was before. But he's available, looking better every day, and getting more confident in that."

The Celtics depth chart in the frontcourt consists of both Grant and Robert Williams, and Daniel Theis who could also see an increase in playing time.
As for Miami, they'll be without their starting point guard in Kyle Lowry, who has been in and out of the lineup throughout the postseason with hamstring issues.
Both the shorthanded Celtics and Heat are set to do battle in Game 1 of the East Finals starting tonight at 8:30 ET on ESPN.
Joel Pavón
Follow @Joe1_CSP