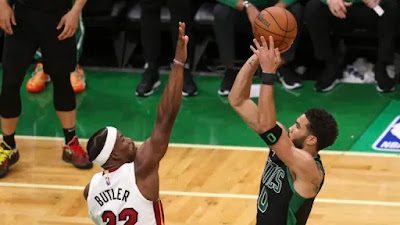 The Celtics have one last chance to beat the Miami Heat and advance to the NBA Finals for the first time in 12 years, after missing a golden opportunity in a 111-103 Game 6 loss at TD Garden Friday night.
All-Star Jimmy Butler put on a clinic with 47 points and 16-of-29 shooting, including 4-of-8 from deep to go along with nine rebounds, eight assists and four steals to extend the Heat's season by forcing a decisive Game 7 in Miami.
The Celtics' star duo of Jayson Tatum and Jaylen Brown combined for eight points in the fourth quarter on one field goal attempt. Despite Tatum finishing with 30 points on an efficient 9-of-12 from the floor, he committed seven turnovers, while Brown scored 20 points and had four turnovers himself -- the team overall turned the ball over 18 times, which led to 23 Heat points.

"Yeah, it's kind of indicative of how our nights have been in the series when we don't take care of the ball," C's coach Ime Udoka said in his postgame presser Friday. "A lot of careless ones, unforced and that got us behind. Obviously, dig ourselves out of a hole from the get-go, got it back to 29-22 [in the first quarter] but weren't playing our best at all. And through the game any time we got within striking range, it felt like (we had) a poor decision, whether it was a turnover and they got out and scored. So kept it at five to seven-point margin. So we had chances and didn't take advantage of them."

Meanwhile, the Celtics also blew arguably the best performance from Derrick White since he was acquired in February. The backup point guard scored 22 points (the most he's had since joining the team) on 7-of-14 from the field, including 4-of-7 from 3 and five assists.

"Just kind of overall frustrated, but get some rest, learn from it, get on this plane and go to Miami and get a win," White said of the team's mood in the locker room following the loss.

The Celtics will play its second straight Game 7 this postseason, something that White admits his teammates could have avoided in back-to-back series now.

"Yeah, I mean, we're frustrated, but if it was easy, it wouldn't be us," White said. "We're going to get on this plane, we’re going to go down to Miami and try to get the big win in Game 7. We've been here before, and we've got a lot of confidence in our group."

Even though Tatum and Brown were both held in check down the stretch by Miami's defense both of the young stars' confidence remains at an all time high.

"Scale of 1 to 10? 10," Tatum said in his postgame comments when asked about his confidence level that the Celtics would win Game 7. "I mean, it shouldn't be any less than that, right? You know, it's the last game. That's what it's all about. It's a 10 out of 10 in my confidence level and the group."
"It's no secret. It's Game 7, trip to the NBA Finals, a lot on the line," Tatum added. "A couple of us have been in this situation before, so we know what’s at stake. We know how much this means to everybody."

Boston is 6-2 on the road in the playoffs so far and 5-0 following a loss, which is enough evidence that Udoka believes his roster can pull out a Game 7 win on the road.

"We won the close-out game, obviously, Game 7 [against Milwaukee], and for us, we've won two in Miami, so that's the positive of it," Udoka said. "We know we can go there and win."

Udoka also agreed with White's comments about the Celtics not making it easy on themselves.

"But just have to make it harder than it is, and at times it feels like we're doing that, not taking advantage of what's in front of us, and just overall sloppy basketball on both ends," Udoka said. "So we can't have that on the road. We've done a good job getting off to better starts there, and just have to maintain that through our physicality."

While Brown admits "it hurt to lose on our home floor" in Game 6, the Celtics wing knows how important it is to finally get over the hump, especially after four Eastern Conference Finals appearances in six years.

"Just got to breathe. You’ve got to get ready, like you said, prepare mentally, but come into the game loose, come into the game free, come into the game with a clear mind," Brown said to reporters on Friday. "You don’t want to put unnecessary pressure on yourself and come and be ready to hoop, come ready to play basketball.
"At the end of the day, that's what it is. We understand the severity of the game that's on the line. We've just got to come out and play Celtic basketball tonight. We've got a great opportunity, and we left the ball short.
"We've got another opportunity on Sunday. I'm looking forward to it."

The Celtics and Heat will do battle in a winner-take-all Game 7 tonight for a chance to represent the East in the NBA Finals. ESPN has the tip-off at 8:30 ET.