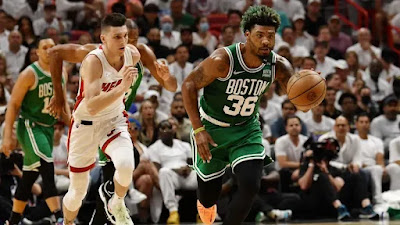 The Celtics bounced back in Game 2 to steal homecourt advantage, as they beat the Miami Heat 127-102 Thursday night at FTX Arena.
Jayson Tatum had 27 points on 8-of-13 from the field and 4-of-6 from deep, while Marcus Smart, who missed Game 1 with a mid-foot sprain, was one rebound (9) shy of a triple-double after putting up 24 points (5-of-12 from 3), 12 assists and three steals.

"I got to get my rest, got to get my health back, got to watch and see some things and come out and execute in this game," Smart said in his postgame presser.

Jaylen Brown also finished with 24 points, eight rebounds and Grant Williams added 19 points to help even up this Eastern Conference finals 1-1.
Al Horford was cleared to play in Game 2 after sitting out the series opener due to being in league Health and Safety protocols, chipped in 10 points on 4-of-4 from the floor and Payton Pritchard also netted 10 points off the bench for the Celtics -- who are now 4-0 in the playoffs following a loss.

"Guys have pride and looked at a golden opportunity that we kind of lost (in Game 1) and thought we could do much better," C's coach Ime Udoka said. "And we did that tonight."

Jimmy Butler scored a game-high 29 points, while Gabe Vincent (4-of-8 on 3s) and Victor Oladipo each scored 14 apiece for the Heat -- who were undefeated at home during the postseason coming into Game 2 and are now 7-1.
The Celtics used a 17-0 run after trailing by 10 in the first quarter and shot 9-of-11 from beyond the arc, as Brown scored 11 points to end the period.
Boston never looked back, including Tatum's 17-point second quarter, as the Celtics kept pouring it on for 18 straight minutes to outscore the Heat 60-21 and take a 70-45 lead at the break (the largest postseason halftime lead in franchise history on the road).
Butler came alive once again in the third quarter with 16 points of his own that got Miami within 17, before the Celtics used a 12-2 spurt to get back ahead by 27 and make it 96-71 going into the final frame.
Miami, who shot 10-of-34 from 3-point territory for the game, sat its starters to begin the fourth as the deficit grew to as many 34 points.

"I was proud in the way we responded, said Tatum during his postgame comments. "Last game was tough, just kind of how we lost, how I played in that third quarter. So I was excited on how we were going to just bounce back and respond regardless if we won or lost...we just played a lot better."

The Celtics will look to grab a 2-1 series lead in this best-of-7 when they return home to TD Garden Saturday night and host the Heat in Game 3, which will tip-off on ABC at 8:30 ET.