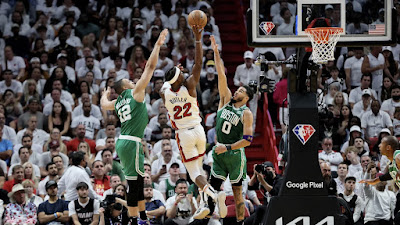 The Celtics are rulers of the East once again, as they held off the Miami Heat 100-96 Sunday night in Game 7 at FTX Arena to clinch an NBA Finals berth for the first time since 2010.
Jayson Tatum was awarded the inaugural Eastern Conference Finals MVP -- named in honor of Celtics legend Larry Bird -- after dropping 26 points on 9-of-21 shooting (4-of-7 from deep) to go along with 10 rebounds and six assists to lead the C's to the championship round after getting to the East Finals four out of the last six years.

"To get over the hump with this group, it means everything," Tatum said in his postgame presser.

Marcus Smart had a bounce back performance from Game 6 with 24 points, nine rebounds and five assists, while Jaylen Brown also netted 24 points on 8-of-15 from the field plus, six rebounds and six assists for the Celtics, who are now 7-2 on the road in the postseason and 6-0 following a loss.

"This is amazing," said Smart, the longest tenured Celtic during his postgame comments. "We finally got over the hump."

Jimmy Butler followed up his 47-point Game 6 performance with a 35-piece on 13-of-24 from the floor and nine rebounds to nearly will the Heat to another victory at home. Bam Adebayo showed up for the first time since Game 3, notching a double-double of 25 points and 11 rebounds, as Kyle Lowry added 15 points, seven assists in what turned out to be Miami's season finale.

"It's heartbreaking when it ends like this," Erik Spoelstra said to reporters. "You certainly have to credit the Boston Celtics organization and their team and their coaching staff. We tip our hats off to them. They are a heck of a basketball team."

The Celtics led wire-to-wire in this one, as they jumped out to a 24-9 advantage out of the gate that eventually turned into a 32-17 lead to open up the second quarter. Boston was up 55-49 at the break before using a 10-3 run in the third period in response to the Heat's 11-2 run at the end of the first half once a Max Strus 3-pointer was waived off when he was called for stepping out of bounds.
A Tatum block on Lowry's 3-point attempt in the final seconds of the quarter had the C's up 82-75 heading into the final frame.
Boston scored 16 out of the first 26 points to start the fourth, but the Heat had one last rally in them, as they went on a 9-0 spurt to get within two (98-96) with 50.7 seconds remaining -- the closest they would get the rest of the way.
Butler's running pullup from 3, which would have given the Heat their first lead of the night, was short and Smart hit two clutch free throws after previously missing five straight field goals during Miami's late run to ice the victory and earn the C's a trip to the NBA Finals.

"Today was the biggest test," Brown said in his media press conference. "Not just of the year, but of our careers."

"The road that we took to get here, not a lot of people believed in us," Tatum said. "We took the toughest route. It worked out."

Boston, who has improved to 26-9 in Game 7s, will now face the ultimate test when they take on the Golden State Warriors in attempt to win a league-leading 18th championship. The NBA Finals tip-off Thursday night at 9:00 ET on ABC.