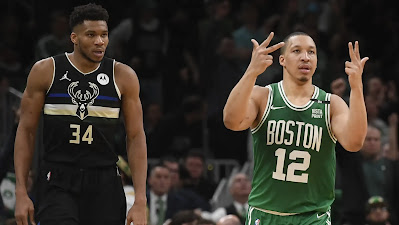 Grant Williams was huge reason for the Celtics 109-86 blowout win in Game 2 over the Milwaukee Bucks Tuesday night to tie the series 1-1.
Williams shot 7-of-14 from the field, including hitting a career-high 6-of-9 from 3-point territory and scoring 21 points off the bench.

"It's just about making the right reads. Making the right play," said Williams postgame. "In the first game, we did a kind of a poor job, just getting rushed, kind of forcing shots up. If the first three that we saw that was open we kind of we shot no matter if there was three people flying at us. So tonight, we just knew that the more we moved it, the more opportunity it would be open."

Aside from a great offense performance, Williams also played some top notch defense on All-Star Giannis Antetokounmpo -- who has been limited to 20-of-50 (38.5%) from the floor so far through two games.
While the Greek Freak finished with 28 points on 27 shots, he was 4-of-10 from the field when Williams guarded him on 31 possessions.
When Williams spoke to the media, he credited the defensive adjustments made in Game 2 when it came to guarding Antetokounmpo and that all he had to do was his job.

"I view it as guarding him on an island," Williams said Tuesday. "Where it's just you and him, and you have to do your job. And for us, that was kind of how we viewed it for this game, to see how it will go… You have to kind of hunker down and, and trust in the work that you've done, and do your best to contain one of the best players in the world."

With both teams playing physical throughout Game 2, Williams gave props to the Bucks for not giving up despite playing from behind the whole night.

"When it comes to that, this is one of the most competitive teams you play in the league," said Williams. "They have guys down the line that you have the utmost respect for because of that. Giannis, Bobby [Portis], guys like that, they approach basketball as if it's life dependent. And those are the ones you'd love playing against because it brings more out of you."

The Celtics, who sot 20-of-43 from behind the 3-point arc and had 28 assists, will head to Milwaukee as Game 3 is scheduled for 3:30 ET Saturday afternoon on ABC.
Joel Pavón
Follow @Joe1_CSP