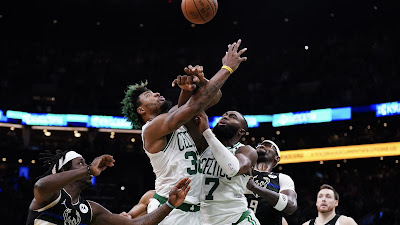 The Celtics fell to the Milwaukee Bucks at TD Garden 110-107 Wednesday night following a fourth quarter collapse in Game 5 and now trail their second-round matchup 3-2.
Jayson Tatum had 34 points on 12-of-29 shooting, including 2-of-11 on 3s,  while Jaylen Brown added 26 points, eight rebounds and six assists. Marcus Smart chipped in 15 points on 6-of-11 from the field and made 3-of-5 from behind the arc.
The Celtics, who were playing without Robert Williams for the second-straight game with left knee soreness, are now on the brink of elimination after missing a golden opportunity to not only take a pivotal lead but be the first team to win consecutive games in this series.

"I could come up here and pout and be sad," said Tatum in his postgame presser. "There'd be a big story about how I don't believe us. It's the first to four. There's no sense in being sad. You go win the next game."

Giannis Antetokounmpo finished with 40 points on 16-of-27 made attempts to lead all scorers to also go along with 11 rebounds. Jrue Holiday had a near triple-double of 24 points, eight rebounds and eight assists, while Bobby Portis added 14 points, 15 rebounds off the becnh for the Bucks -- who can advance to their second Eastern Conference Finals in consecutive seasons with a win come Game 6 tomorrow night at home.
Boston was ahead 54-47 at the half after holding the Bucks to a 19-point second quarter. Milwaukee cut the deficit to one (60-59) with 7:38 left in the third, but never grabbed a lead in the period. The C's went on a 11-3 run -- taking a 86-77 advantage heading into final frame.
The Celtics opened the fourth with another 7-2 spurt, giving them the largest margin of the night (93-79) with 10:16 remaining, before the Bucks outscored the home team 26-12 to tie the game at 105 with 42.4 seconds left to play. Tatum hit a pair of free throws to put Boston back on top on the very next possession.
Antetokounmpo was fouled by Grant Williams and had a chance to tie it again in the final 14.2 seconds. The former league MVP made the first free throw, but missed the second and Portis grabbed the rebound to put it off the backboard -- which give the Bucks a one-point lead (108-107) -- with the C's calling their last timeout.
Smart drove baseline to the basket out of the timeout before Holiday blocked him and came away with the ball, throwing it off the Celtics guard while falling out of bounds in the process.
Pat Connaughton (13 points off the bench) sank a pair of free throws after being fouled immediately with 5.9 seconds on the clock. Holiday struck again when he stole the ball from Smart at halfcourt, as he tried to rush and get a potential game-tying 3-pointer.

"If we box out we win that game," Smart said during his postgame comments. "They're the defending champs. They made some championship plays. And now we've got to bounce back."

The Celtics committed eight of their 10 turnovers in the second half and were outrebounded 49-36 overall, including the Bucks' 17 offensive rebounds to Boston's five, while Portis had seven offensive boards by himself.

"Of course, we're gonna be down. Guys are going to be (upset) about the outcome. We outplayed them for 3½ quarters," Celtics coach Ime Udoka said. "We talked about showing our resolve, and we made it tougher on ourselves now. It'll make it sweeter when we bounce back. But we gave up a golden opportunity tonight."

Game 6 is scheduled for Friday night in Milwaukee at 7:30 ET on ESPN, as the Celtics look to avoid elimination and force a Game 7 back home this weekend.