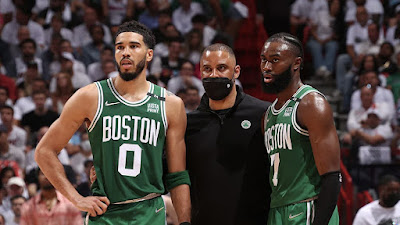 The short-handed Celtics fell to the Miami Heat 118-107 Tuesday night at FTX Arena in Game 1 of the Eastern Conference Finals to trail 1-0.
Jayson Tatum had 29 points on 10-of-21 from the field to go along with eight rebounds, six assists, while Jaylen Brown added 24 points and 10 rebounds in the loss. Robert Williams, who returned from a four-game absence, chipped in 18 points, nine rebounds and Payton Pritchard also scored 18 points off the bench.
The Celtics, who eliminated the Milwaukee Bucks in their second-round best-of-7 series just two days ago, were down two starters in Marcus Smart (mid-foot sprain) and Al Horford (Health and Safety protocols).
Jimmy Butler finished with a game-high 41 points on 12-of-19 shooting and nine rebounds. Tyler Herro had 18 points off the bench and Gabe Vincent netted 17 points for the Heat, who are undefeated at home this postseason.
Boston led nearly the entire first half, as they took a 62-54 advantage into the break before being outscored 39-14 in the third quarter. Butler scored 17 points, while helping limit the C's to 2-of-15 shooting from the floor and forcing six turnovers in the period.

"We won three quarters other than that, but obviously that one is going to stand out," Celtics coach Ime Udoka said. "We semi-bounced back in the fourth and started to play well again and matched their physicality, but 39-14 on 2-for-15 is tough to overcome."

The Heat led 96-76 (their largest of the night) with 10:45 left to play after Herro was fouled shooting a 3-pointer and hit all three free throws. The Celtics used a 10-0 run to cut their deficit in half and Tatum's 3-ball made it a nine-point game, but the closest they would get was seven the rest of the way -- losing for just the fourth time in the playoffs.

"It wasn't anything different that they did," Udoka said. "They just came out and imposed their will."

The Celtics are 46-7 this season when leading by at least 13 points (their largest margin in Game 1). They'll look to bounce back in Game 2 Thursday night, as ESPN has the tip-off at 8:30 ET.