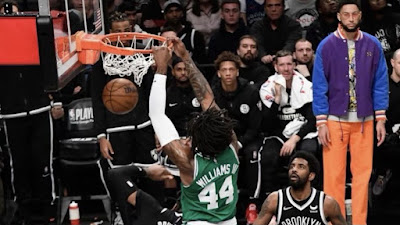 After being sidelined for nearly a month, Robert Williams made his return from a partially torn meniscus in Game 3 ahead of his original 4-6 week timetable.
Williams totaled two points on an alley oop dunk, two rebounds, one assists and a block in his first game since March 16.

"The whole day, guys have been hyping me up. I’m just glad to be back out there,” Williams said of his teammates before the game and celebrating after the alley-oop over Andre Drummound. "OG might be the happiest though. Al [Horford] might be more happy than me."

It was all smiles following the Celtics 109-103 win over the Brooklyn Nets to take a commanding 3-0 best-of-7 first round lead, as Williams, who played 16 minutes Saturday night, said he thought he'd be back "right after surgery."

Take one more look at that Rob dunk 🤩 pic.twitter.com/TijwbgadYh


Williams is also happy for his teammates, who were able to finish the regular season with the second seed in the East and take the first two games in Boston against the Nets without him.

"I'm extremely proud of them, said Williams in his postgame presser. "I feel like we've done a great job of bouncing back from hitting adversity. We didn't do a great job of that at the beginning of the season, but I'm proud of the guys and I'm trying to add to that."

While it's unknown if there's a plan of a minute increase for Williams come Game 4, the Celtics have an opportunity to close out their first-round series against the Nets Monday night with no injuries to report.

"I'm really just glad to step back in and play the role for my team that I played before I got hurt, helping those guys out," Williams said.

As far as his Celtics teammates go, count Jaylen Brown as one who was clearly more than excited to have Williams back in the lineup.

"Rob was pretty damn good to me," Brown said during his postgame comments on Saturday. "Came back, instant impact with what he's been doing all year: protecting the rim, had some big blocks, some lobs. It was great to see him catch a lob. It was uplifting for everybody. His presence just being on the floor, knowing he’s behind us, makes us feel good. As we continue to go, we'll look to him to continue to get his reps and come back strong and looking to make a push."

The Celtics and Nets tip-off from the Barclays Center in Game 4 tonight at 7:00 ET on TNT.
Joel Pavón
Follow @Joe1_CSP