Jaylen Brown comes up big for Celtics in Game 2 win 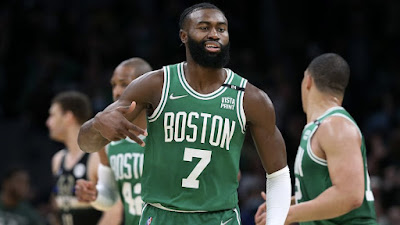 Jaylen Brown set the tone early in the Celtics 109-86 win over the Milwaukee Bucks in Game 2 Tuesday night at TD Garden.
The Celtics wing scored a game-high 30 points (25 of them came in the first half) on 11-of-18 shooting, including 6-of-10 from deep to go along with five rebounds, six assists, two steals and a block.

"That was our first true test in the playoffs, how you respond," Brown said to reporters. "I know a lot of us were a little bit worried -- not worried, but curious as to how we would come back in this position, because we hadn't lost. That was our first loss in the playoffs so far, so getting accustomed to losing is something that we don't want to do, but in a good way, how you respond is everything.

"What you're made of comes to light in those moments, so you got to see what the Celtics were about tonight."

Boston had a 25-point lead at halftime and never looked back, while setting a new franchise record for the most threes made in a playoff game going 20-of-43 from 3-point territory. The C's held Milwaukee to only 86 points, the lowest total of the season for the Bucks.

"We knew we had to come out and play like our season was on the line, and we did," said Brown of his teammates.

Brown, who was battling some hamstring soreness, bounced back nicely from a horrendous 4-of-13 performance for 12 points on Sunday in Game 1, to netting 17 points just in the first quarter alone two days later. Jayson Tatum also added 29 points, as he and Brown both combined for 20-for-38 from the field and 11-for-20 from 3.
Even teammates could predict that Brown would have a much needed big game, as he arrived more than three hours prior to tip-off to get shots up.

"You could tell from just how he approached when he came to the arena, how he was ready for the game," said Grant Williams in his postgame presser. "I saw it in his eyes."

"If I was a betting man, I would bet that JB was going to have a great game and he set the tone. That was big for us," said Tatum during his postgame comments.

Brown set a new career-playoff high of six made 3s and six assists, with Marcus Smart out with a thigh contusion and only committed two turnovers -- a major improvement from the seven (team-high) he had in Game 1.
Of course the main concern remains to be Brown's hamstring, which he was seen a few times grabbing throughout the afternoon, especially in the second half. However, he refused to complain or make any excuses when asked about it after Game 2.

"It's good," Brown said to the media about his hamstring. "I'll be ready for Game 3...My whole life is on pause. The only thing that matters is the playoffs."

With the series tied 1-1, Game 3 is set for Saturday afternoon at 3:30 ET on ABC, as the Celtics and Brown will have some time to rest before heading out to Milwaukee to do battle once again.
Joel Pavón
Follow @Joe1_CSP