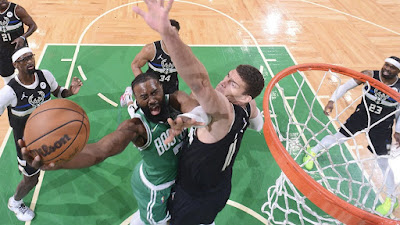 The Celtics bounced back to beat the Milwaukee Bucks 109-86 in Game 2 Tuesday night at TD Garden to even their Eastern Conference semifinals series 1-1.
Jaylen Brown shot 11-of-18 from the field and 6-of-10 from behind the arc to lead all scorers with 30 points (25 by halftime) to go along with six assists, five rebounds and two steals.

"It's the playoffs. That's it," Brown said in his postgame presser. "We can't let one game kind of dictate how this series goes. We wanted to be aggressive from the gate."

"We wanted to come and play like our season was on the line and we did," Brown added.

Grant Williams recorded a playoff career-high of 21 points (6-of-9 from 3), while Al Horford added 11 points and 11 rebounds for the Celtics, who were playing without Marcus Smart (thigh contusion).
Boston shot a franchise record 13-of-20 in the first half and 20-of-43 for the game, while scoring 24 points off of 17 turnovers.

"We wanted to match their physicality and punch back tonight," Celtics coach Ime Udoka said. "A big message was show them who we are."

Giannis Antetokounmpo finished with 28 points, nine rebounds and seven assists to lead the Bucks. Jrue Holiday had 19 points, seven assists, while Bobby Portis and Pat Connaughton each contributed with 13 points respectively.
The Celtics jumped out to a 18-3 advantage to open up the first quarter and never looked back, as Brown set the tone early -- scoring a playoff career-high of 17 in the period. Antetokounmpo started the night 1-of-7 and the C's were ahead 32-21 to start the second.
Boston continued to pour it on, outscoring the Bucks 33-19 to grab a 65-40 lead at the break. Antetokounmpo's 18-points in the third and a 10-0 run for Milwaukee cut a 26-point deficit down to 72-56 late in the period.
The Bucks kept chipping away throughout the fourth, trailing 94-82 with 4:30 left to play following a pair of made free throws by the Greek Freak, before Tatum hit a 3 that sparked a 15-4 spurt for Boston and secure a blowout win at home.

"We were pissed off on how we played [Game 1]," said Tatum during his postgame comments. "We knew that we had to play better and now it's 1-1. We'll get some rest, see what we can do better, watch some film and get ready for the next one."

The Celtics will look to take a 2-1 lead when this best-of-7 series shifts to Milwaukee Saturday afternoon. Game 3 tips-off at 3:30 ET on ABC.