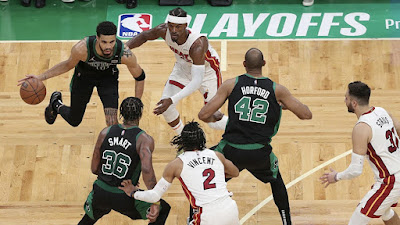 The Celtics failed to close out the Miami Heat at TD Garden Friday night in Game 6, as they fell 111-103 and the Eastern Conference Finals is tied up 3-3.
Jayson Tatum finished with 30 points on 9-of-12 from the field, 4-of-7 from behind the arc, nine rebounds, while Jaylen Brown added 20 points, six rebounds and five assists in the loss.

"They responded to every time we made a run, every time we got close, every time we went up," Brown said of the Heat in his postgame presser. "They made key baskets and timely shots and things like that. It's almost like in a game like this, and they got it going, can't leave room for error, and we did, I did, we as a team did, and next game if we come out like that. We've got to be better. That's what it came down to. They played an amazing game. They made crazy shots. But we've got to play great defense again and force them to make some of those shots again."

Derrick White had 22 points on 7-of-14 shooting and 4-of-7 from deep to go along with five assists. Marcus Smart netted 14 points and Robert Williams chipped in 12 for the Celtics, who are now 5-4 at home.
Jimmy Butler led all scorers with 47 points, hitting 16-of-29 from the floor, including 4-of-8 from 3-point territory plus, nine rebounds, eight assists and four steals to help Miami extend their season and set up a winner-take-all Game 7 at home.

"Jimmy Butler is a great competitor; he really is," Heat coach Erik Spoelstra said to reporters following the win. "You can mis-define him in a lot of different ways, but his competitive will is as high as anybody that has played this game. He put his fingerprints on this game."

Kyle Lowry bounced back from going scoreless in Game 5 to recording a double-double of 18 points and 10 assists in his best performance of the series. Max Strus had 13 points after scoring a combined four points in the previous two games which included 14 straight missed 3-pointers before his first made 3 in the second half of Game 6.
The Heat were also without Tyler Herro for the third straight game after sustaining a groin injury back in Game 3.
In the most back-and-forth game of the series, Butler came out of the gate with 14 points, five rebounds and four assists to start the first quarter. The Heat took a five-point lead into the second, as their lone All-Star scored or assisted on 24 of the team's 29 points.
Boston trailed 48-46 at the break with Tatum and Brown each having scored 18 points apiece to keep pace with Butler.
The Heat used a 12-2 run to go up 70-58 with 5:30 left in the third period, before the Celtics cut the deficit in half, but Miami scored 12 of the next 21 points and grabbed an 82-75 advantage into the final frame.
The Celtics got within four on a White 3-pointer with 9:36 left to play and the C's followed it up with 9-5 spurt which ended with White hitting a go-ahead 3 to put them up 97-94 (22-12 run overall) with 4:42 remaining. Lowry tied it up again with a 3 of his own -- before fouling out -- to spark an 11-2 run for the Heat to put Boston away in front of their own home crowd and force a decisive Game 7 on the road.

"We've won there, but we make it harder on ourselves than it needs to be," said Celtics coach Ime Udoka on having to travel to Miami after not putting the Heat away in an elimination game at the Garden.

Despite White scoring 11 of his 22 in the fourth quarter, Butler outscored Boston's starting-five 17-15, with the Heat star going 6-of-9 from the field and the C's five hit just 3-of-8. Tatum and Brown also combined for eight points in the final period, six of them were on made free throws, while Brown missed two key shots from the charity stripe with the game tied 99-99 and 2:18 left after hitting his previous seven straight.
The Celtics are seeking to advance past the East Finals for the first time since 2010, two years after the new Big-3 of Paul Pierce, Kevin Garnett and Ray Allen won the franchise's 17th championship banner.

"It's no secret. It's Game 7, trip to the NBA Finals, a lot on the line, said Tatum in his postgame comments. "A couple of us have been in this situation before, so we know what's at stake. We know how much this means to everybody."

Game 7 and an opportunity to make the NBA Finals is set for Sunday night with a 8:30 ET tip-off at FTX Arena in Miami, as ESPN will have the broadcast.