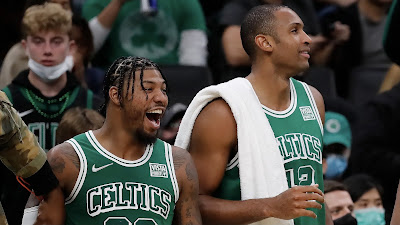 The Celtics have listed Marcus Smart as probable to play in Game 2 of the Eastern Conference finals Thursday night with a mid-foot sprain and Al Horford as doubtful, as he remains in Health and Safety protocols.
Both starters missed Boston's 118-107 Game 1 loss to the Miami Heat, despite Smart being listed as questionable all day Wednesday. He was officially ruled out after taking a hard fall in the C's Game 7 win over the Milwaukee Bucks to advance to the East Finals for the fourth time in six years.
Meanwhile, Horford's absence came as a surprise since he was present during the team's morning shootaround, but it was reported he would not play just hours prior to tip-off due to being in league's COVID protocols -- which would make it the third stint for him this season.

It remains unknown when Horford, who tested positive for COVID-19 during preseason before being placed again in protocols during the month of December, will make his way back to play in this best-of-7 series. In order for Horford to be back in the lineup sooner rather than later, he would have to return two negative PCR tests at least 24 hours apart, otherwise it'll be at least 4-5 days at the earliest that Horford would return pending a negative test after initially testing positive, which was Tuesday night.
Ime Udoka wouldn't confirm if Horford -- who is reportedly fully vaccinated -- had indeed returned a positive test or not during his pre-Game 1 presser, the Celtics coach was also unavailable to speak with the media Wednesday afternoon due to a non-COVID related illness.
While the Celtics are prepared for the "likely scenario" of Horford being out for Game 2, if the starting big man did actually test positive Tuesday night, he wouldn't be able to suit up for Game 3 on Saturday when the series shifts to Boston.

Boston is prepared for the likely scenario of Al Horford remaining in the league’s Health and Safety Protocols through Game 2 on Thursday, sources said. https://t.co/QsWWjKDRcq


According to a report by ESPN's Brian Windhorst, "multiple" have tested positive as part of the Celtics staff and travel party over the last week.

"A huge curveball ahead of a major series like this. Al Horford has been in the protocols three times this season, once in the pre-season, once in December, and now. Just because he's in the protocols doesn't mean he's tested positive, but that was the indication yesterday," said Windhorst Wednesday morning on ESPN's Get Up. "The Celtics have had multiple positives in their traveling party in this past week, so there has been some concern about this."

The Celtics also just announced that Derrick White (personal reasons) would be out for tonight's Game 2, with speculation that it's most likely for the birth of his first child, which he did speak about that his wife was expecting back in November.
As for the Miami, they'll be without Kyle Lowry (hamstring) for a second-consecutive game, as the Heat host the Celtics tonight beginning at 8:30 ET on ESPN.