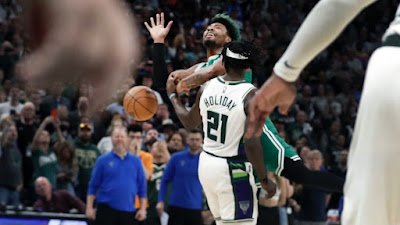 The NBA released the last two-minute report for the Celtics Game 3 loss to the Milwaukee Bucks.
According to the report, it lists five incorrect calls in the final two minutes of Saturday's game, including two non-calls that would have given Boston a possession.
First, the league determined a foul on Giannis Antetetokounmpo should have been called at the 1:54 mark following a missed layup, the Bucks All-Star grabs Al Horford's arm, preventing him from running up the court. That would have been Antetokounmpo's fifth personal foul had the missed call been made.
However, the play ended in two free throws for Jaylen Brown that gave the Celtics its first and only lead of the fourth quarter, but it was still ruled an incorrect call.
The second missed non-call and arguably the most important, came with 50.0 seconds left to play, as the league ruled that Jrue Holiday should have been called for a five-second violation on an inbound play. Anteteoukounmpo would go on to score the go-head basket to put the Bucks (101-100) up for good.
Of course, the play that the basketball world was talking about the most occurred with 4.6 seconds remaining, when Marcus Smart appeared to be in a shooting motion when attempting a 3-pointer and Holiday made contact by hitting his arms. The last-two minute report states the original call of it being a non-shooting foul, was deemed correct.
The report explained that the league ruled Holiday's contact with Smart came before he was going upward in his shooting motion.

"Holiday (MIL) commits a foul by making contact with Smart's (BOS) arms before he is bringing the ball upward toward the basket. A personal foul is correctly called."

Celtics coach Ime Udoka was not too pleased when asked about the play after the 103-101 loss Saturday night.

"It was a foul. He caught the ball (and) he was turning into a shot (with) both feet set. You can't say that was a sweep like that when you’re going into a shot. Poor call. Poor no-call," Udoka said in postgame presser about Smart's final attempt with Boston down 3 looking to send the game into overtime. "You can clearly see it in person and I saw it on the film. He's curling into a shot and getting fouled on the way up. Bad missed call."

While Smart says he wasn't given an explanation for the non-shooting call on that play, he believes that he should have been awarded three free-throws and that it was not a sweep move with that little amount of time left on the clock.

"What'd you guys see? I would like somebody to answer that," Smart answered during his postgame comments when asked about the late-game foul. "We need 3 with 4.6 seconds. They know we need 3. We know they're going to foul. It's not like (Holiday) got me when it was down low. I was already in my shooting motion. I thought it was three free throws. They said it wasn't. Deal with with it."

From Udoka's perspective other calls or non-calls throughout Game 3, especially those that Boston seemed to match Antetokounmpo's physicality, didn't go both ways.

"[The officials'] explanation is that if they don't fall down, they don't call it. I'm going to have to teach my guys to flop more," Udoka said.

Either way, the Celtics will look to avoid a 3-1 hole to the Bucks in this second-round best-of-7 series with Game 4 scheduled for Monday night at 7:30 ET on TNT.
Joel Pavón
Follow @Joe1_CSP