Celtics have 'some concerns' over Jaylen Brown's hamstring ahead of series vs. Bucks 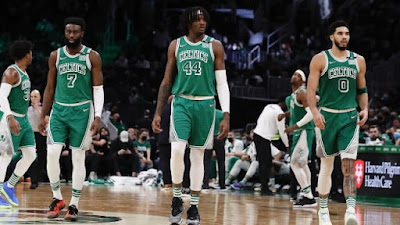 The Celtics are keeping a close eye on two of its starters ahead of their second-round matchup against the Milwaukee Bucks, which will tip-off at 1:00 ET Sunday afternoon.
President of basketball operations Brad Stevens during his weekly appearance on Sports Hub 98.5's Toucher and Rich Show, was asked about "any concerns" with Jaylen Brown going into the best-of-7 series with the Bucks. The C's wing told reporters "had some hamstring problems going into the second half" of the team's Game 4 clincher over the Brooklyn Nets Monday night.

"Yeah, I mean there's some concern," Stevens said Thursday morning. "He was definitely tight even the next day, so we're going to tread lightly this week as we have a couple of days off, and then see how he's doing. But it's certainly something that we're going to be all over, and hamstrings are nothing to play around with. He certainly felt it a little bit the next day."

Brown missed eight games back in November before saying he returned "too early," despite playing five straight games. He was once again shut down during a 1-4 west road trip the following month, as he sat out a total of 13 games with the same right hamstring strain. The Celtics wing came back in mid-December and hasn't had issue with the injury up until a few days ago, but there's been no setbacks to report.
Robert Williams, who recently returned to play limited minutes in Game 3 and 4 in Brooklyn, after missing just over three weeks post surgery on a partially torn meniscus in his left knee, could begin to see an increase in playing time, according to Stevens.

"I thought he looked rusty ironically more in the second game than the first game," Stevens said of Williams. "But that's one of the reasons why when he was cleared to play -- instead of doing another week of practices where you're going and building up to playing 24-28 minutes against the back-end of our roster and a couple coaches sprinkled in -- it's better to just get playoff reps in limited time.
"He looked good, it's just a matter of knocking the rust off, and I think that's easier to do in short stints," Stevens added. "You’re not getting your normal rhythm in a game, you're not getting your normal feel in a game, but you're getting a taste of playoff basketball. So he should be able -- after this week and a few practices, having even that brief experience -- to really up his minutes here moving forward."

Celtics coach Ime Udoka gave an update on both Brown and Williams, saying they're feeling fine, as the team was preparing for their next opponent following a four-game sweep of the Brooklyn Nets in the first-round.

"To get [Williams'] wind will be big this week, get some live work in the last few days, just get him built back up to get him back to his normal rotation lineup minutes," said Udoka of Williams during his Wednesday post-practice presser.

While the Celtics get ready for their best-of-7 second-round matchup against the Bucks, Milwaukee is also set to be without their All-Star shooter in Khris Middleton -- who is reportedly out for the series with a Grade 2 MCL sprain in his left knee.
ABC will have Game 1 from TD Garden, which is scheduled for a Sunday matinée start time.