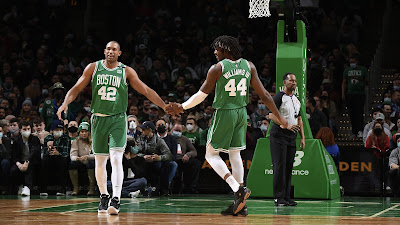 Robert Williams has been an essential part of the Celtics' success this season and even after suffering a partially torn meniscus, the big man has impressed his teammates over the past month.
Al Horford praised the young center they call Time Lord when asked about Williams' ascension despite having to battle through injury in the opening-round against the Brooklyn Nets and trying to get back into game shape so far versus Milwaukee.

"All the off-court stuff is what has really impressed me with him, said Horford in his postgame practice presser. "So it's a lot of credit to him, and the time he's put in, and the work he's put it is showing."

Williams averaged a career-high 10 points, 9.6 rebounds and 2.2 blocks per game this season. While its only been four games since returning from his surgery (which took less than four weeks), Williams was successful against Giannis Antetokounmpo -- holding the All-Star to 0-of-5 from the field in Game 1.

"Just trying to do as much as he can to help us. He knows how much we need him, and I was just really impressed with his consistency. And that just speaks to him all year; he's been that consistent," Horford added.

The Celtics and Bucks are all tied up 1-1 in this second-round best-of-7 series, Game 3 is set for Saturday afternoon at 3:30 ET on ABC.
Joel Pavón
Follow @Joe1_CSP