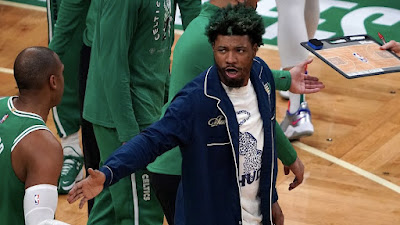 Marcus Smart could return to the Celtics lineup when the series shifts to Milwaukee come Game 3 Saturday afternoon.
The veteran guard sat out of the team's 109-86 Game 2 win at home with a right quad contusion, but gave an update to the media following shootaround

"We're just dealing with the last part of it, and that's getting that restriction off the knee and the joint," Smart said after Thursday practice. "So I feel once that goes away, I should be back to myself, because everything else is healing up the right way and that's the last part, so just got to deal with it."

Smart spoke about how his recovery is going well and that there's a "strong likelihood" he'll be back for Game 3 with the continued treatment and rest.

"If I'm out there, I should be able to do the things I was doing, or I shouldn't be out there," Smart said. "When I come back, I'm coming back to be me, and that's all I can really say about that."

Coach Ime Udoka seemed pretty positive that the Celtics would have Smart back by Game 3.

"He's getting better, getting some work in now, we'll know more tomorrow," Udoka said to reporters Thursday afternoon. "I don't think he's restricted in every movement, some side to side, getting shots up, getting out and sprinting he might be more restricted than other basketball movements."

As of Friday morning Smart has been listed as "probable" for Game 3, per Udoka -- who also said his "quad is feeling much better today."

Coach Udoka says Marcus Smart’s quad is feeling much better today and he is “probable” for Game 3.


With the series tied, 1-1, Game 3 of the Eastern Conference semifinals between the Celtics and Bucks will tip-off from Fiserv Forum at 3:30 ET Saturday afternoon on ABC.
Joel Pavón
Follow @Joe1_CSP