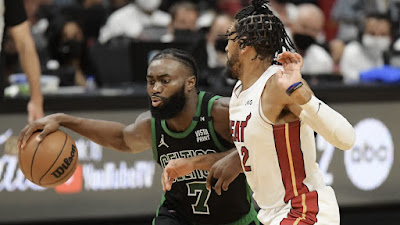 The Celtics beat the Miami Heat 93-80 Wednesday night in Game 5 at FTX Arena to take a 3-2 Eastern Conference Finals lead and are one win away from their first trip to the NBA Finals.
Jaylen Brown had a game-high 25 points on 10-of-19 from the floor, including going 5-of-9 from 3-point range, while All-NBA First Team honoree Jayson Tatum was one assist (9) shy of a triple-double -- scoring 22 points and grabbing 12 rebounds.

"I think the mental stress and strain we put on some teams with our defense has worked and carried us through the playoffs at times," C's coach Ime Udoka said following the win.

Al Horford had 16 points, seven rebounds, five assists and Derrick White added 14 points, five assists for the Celtics, who have improved to 6-2 on the road in the postseason.
Marcus Smart (ankle) and Robert Williams (knee) were upgraded to available after both were listed as questionable just hours prior to the start of Game 5.
Bam Adebayo finished with 18 points, 10 rebounds and Gabe Vincent had 15 points. Jimmy Butler chipped in 13 points on 4-of-18 from the field and 1-of-5 from behind the arc for the Heat, who shot 31.9% overall and 7-of-45 from 3.

"We are not going to make any kind of deflection or any kind of excuse," Heat coach Erik Spoelstra said to reporters. "Boston beat us tonight. And let's be clear about that. There's guys that are far from 100% on both sides."

Miami was without Tyler Herro for the second-straight game after suffering a groin injury in Game 3.

Both teams' shooting percentage was hovering around 37% in the first half and the Celtics trailed 42-37 at the break, before going on a 24-2 run in six-minute stretch to open up the second half.

"In the first half it was tough because we weren't hitting shots and we were turning the ball over," Horford said in his postgame comments. "But the key for us was continuing to do what we do defending, and then on offense playing how we play. And eventually we were able to get it going."

Boston outscored the Heat 32-16 in the third quarter and held them to just 17% shooting to take a 69-58 advantage into the final frame. Another 14-2 spurt pushed the Celtics lead to 23, as Brown hit three straight 3-pointers in a 2 1/2 minute span to start the fourth quarter.
Brown put an exclamation point on the night when he came down the lane for a ferocious slam dunk that saw Heat fans heading towards the exits with 5:19 left to play and their team trailing by 18.
The Celtics will have an opportunity to close out Miami and reach the NBA Finals for the first time since 2010 come Friday night when they host Game 6 on their home floor.
In the last 12 years the Celtics have made four trips to the conference finals with two of those series coming down to a decisive Game 7. In 2012 the C's were up 3-2 over the Heat with a chance send them fishing only to see LeBron James drop 45 points at the Garden in Game 6, while in 2018 they lost their first Game 7 in franchise history at Boston after leading the series 2-0 to none other than James and the Cleveland Cavaliers.

"We've got an opportunity to do something with this group that's special," Brown said during his postgame presser. "Let's not take that for granted."

Game 6 is scheduled for Friday at TD Garden with an 8:30 PM ET tip-off on ESPN.