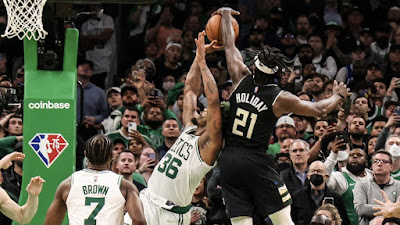 The Celtics failed to put away the Milwaukee Bucks in Game 5 at TD Garden Wednesday night, after losing 110-107, they now find themselves on the brink of elimination.
Despite a 93-79 advantage with 10:16 left to play Boston watched their double-digit lead vanished, as the Bucks went on a 26-12 run to tie at 105 with 42.4 seconds remaining on the game clock.
A pair of made free throws by Jayson Tatum put the Celtics ahead but they wouldn't score again. Bobby Portis' putback off the backboard after a missed Giannis Antetokounmpo free throw gave the Bucks a lead for good before Jrue Holiday blocked Marcus Smart's shot attempt on the next play and followed that up by also stealing the ball from Smart at halfcourt to seal the victory in the final seconds.
While many want to blame the veteran guard for his costly turnovers late in the fourth quarter, C's coach Ime Udoka explained that the team's final play out of their last timeout was not designed for Smart and he doesn't deserve any slander for it.

"We didn't execute as well as we wanted to. We had some offside action bringing a specific player on their team up into the action to get the switch," Udoka said during his Thursday interview with 98.5 The Sports Hub's Zolak and Bertrand. "We knew how they were defending it. Didn't get into it quick enough and get the ball where we wanted to, so Marcus had to go make a play. Five-second count counting down and no timeouts. So, nothing to blame Marcus about that at all. It was really our lack of execution overall as a team."

Smart took it a step further after the Game 5 loss, providing more details on the last play with the Celtics trailing 108-107 and 11.4 seconds left.

"The play was actually: J.T. [Jayson Tatum] was supposed to come up and get it but everybody was standing around," Smart explained following the loss. "We had no timeouts and there's a five-second count on the way. So, I just got open and tried to make a play, Jrue [Holiday] did a good job of helping. That's it, made a good play."

However, Smart did finish with 15 points on 6-of-11 from the field, including 3-of-5 from deep, four rebounds, but only had one assist on the night. He also noted while "it hurts" the Celtics "don't have time to feel it," when it comes to being down 3-2.

Meanwhile, Tatum also spoke about the botched play, admitting he was suppose to get the ball, but that "miscommunication" caused the confusion.

"I was supposed to come off the pin down from Al [Horford], said Tatum in his postgame presser." There was a little miscommunication. I guess the play broke down, and, you know, Smart drove baseline. Jrue Holiday made a good play at the rim. It's as simple as that."

If Celtics' fans still want something to blame for the 14-point fourth quarter collapse that led to a Bucks' 11-2 run in the final 1:55, maybe 17 offensive rebounds that Boston allowed to happen is a place to start. Portis, who essentially won the game for Milwaukee -- grabbed more offensive boards than the C's combined at 9-5 -- none more important than the final one off a missed free throw that landed in his hands when Jaylen Brown bumped into Smart as neither couldn't bring down the rebound.

"We beat ourselves right there. That's the game right there. Seventeen offensive rebounds. [Bobby Portis] had seven and the biggest one of the night," Smart said Wednesday after the game. "That's it. We can't allow that. We're doing our job and we got to continue to do it. It's a tough one, but we gotta move on."

Udoka also pointed at that same glaring stat that couldn't be ignored even with the Celtics "playing well for three and a half quarters," they were still outscored 33-21 in the final frame and mostly due to the Bucks hitting the offensive glass in throughout Game 5.

"Offensive rebounds. Really, that's the story of the game. They had 17 for 20 second chance points. A large majority of those came in the second half. They had six in the first half, so we were doing a good job as far as that," Udoka said during his postgame comments. "To give up 14, especially on those specific plays...they got kick out threes. Some were long rebounds so they were a little tougher. We gotta find bodies obviously on those and the free throw one stands out."

The Celtics will look to force a Game 7 when they take on the Bucks in Milwaukee tonight, ESPN has the tip-off at 7:30 ET.
Joel Pavón
Follow @Joe1_CSP