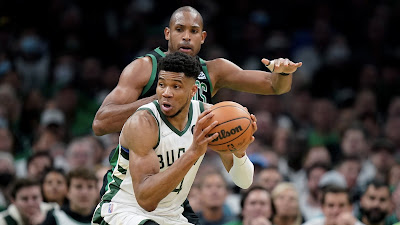 The Celtics didn't look like the same team that swept the Brooklyn Nets during their 101-89 Game 1 loss to the Milwaukee Bucks Sunday afternoon at TD Garden.
If anything, Boston played like the roster that was .500 for much of first three month of the 2021-22 regular season before they turned it around. Giannis Antetekounmpo made the Celtics pay with a triple-double despite being doubled-team -- he easily found opener shooters -- while Jaylen Brown and the rest of the C's offense never got going.

"We understand what we're up against. Obviously, he's [Antetokounmpo] a great player. And yeah, that's that. We're ready to move on for Tuesday," said Al Horford in his postgame presser, following a 12-point and 10-rebound performance.

While Jayson Tatum ended up with 21 points on 6-of-18 shooting and 4-of-9 from deep to go along with six rebounds, it took a while before he got going -- putting up nine first-half points on 3-of-10 from the field.
When talking about Brown's 12 points on 4-of-13 from the floor, nine rebounds and seven turnovers, Tatum just reiterated that the Celtics in general have to remain focused ahead of Game 2.

"I mean, we all had a rough night. Nobody should hang their heads now," Tatum said to reporters. "We're in this together, right? All that matters is if you win or if you lose. I got all the faith in the world and JB. He'll be better in Game 2. We all expect to play better. Can't change what happened. Just gotta get ready for the next one."

Brown, who reportedly was battling hamstring tightness this past week, credited the Bucks on their physicality and overall play, but ultimately echoed his teammates sentiment that he's already looking ahead to Tuesday.

"They did a good job of setting the tone early, picking us up full-court," said Brown during his postgame comments. "We'll make our adjustments and be ready for the next one."

Essentially all the Celtics can do is move on from Game 1, where they only hit 10 two-pointers versus 18 three-pointers while scoring under 90-points. Game 2 is set for Tuesday night at 7:00 ET on TNT.
Joel Pavón
Follow @Joe1_CSP