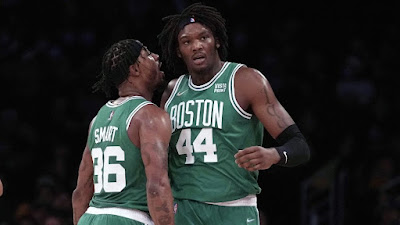 Marcus Smart will sit out Monday night's pivotal Game 4 against the Miami Heat with an ankle injury.
The reigning Defensive Player of the Year sustained a sprained right ankle in the third quarter of the Celtics' 109-103 Game 3 loss. Smart rolled his ankle while trying to grab a rebound, and Heat guard Kyle Lowry fell on it immediately after both player went to the floor. He would return to the game minutes later, but it appears he's paying the ultimate price now that he's sidelined with Boston trailing 2-1 in this best-of-7 Eastern Conference Finals.
Smart was listed as questionable Sunday afternoon, along with Robert Williams, who sat out Saturday with left knee soreness. Williams was still dealing with swelling and soreness in his surgically repaired knee that kept him out of games in both the first-round against the Brooklyn Nets and second-round against the Milwaukee Bucks. Jayson Tatum was listed as probable with a right cervical nerve impingement after suffering a stinger in Game 3 before also returning in the final minutes.

"Marcus has some swelling in his ankle. He took a pretty bad sprain, obviously finished the game, but he's going to feel it a little bit more today. He's getting worked on, getting treatment, and we'll see how he feels tomorrow," head coach Ime Udoka said Sunday during his post-practice presser. "Jayson's fine; it's a stinger that went away pretty quickly and then Rob has improved, feels better than he did yesterday, but like I said, is day-to-day and we'll test it out tomorrow and see how he feels at shootaround."

According to Udoka, there's increased swelling of Smart's rolled ankle and was still considered questionable even after the C's coach spoke to reporters during pregame media availability, only to be downgraded to out. Derrick White will start in Smart's place tonight.
As for the Heat, they'll be without Tyler Herro who sustained a groin injury in Game 3, as Jimmy Butler makes his return from knee inflammation that kept him out of the second half of Saturday's win.
Even without Smart, who was just named All-Defensive First Team, the Celtics look to avoid a 3-1 hole with Tatum and Williams -- named All-Defensive Second Team -- both made available. Game 4 at TD Garden is set for an 8:30 ET tip-off on ABC.