Celtics are NBA Finals bound, while Jayson Tatum says 'This wasn't the goal' 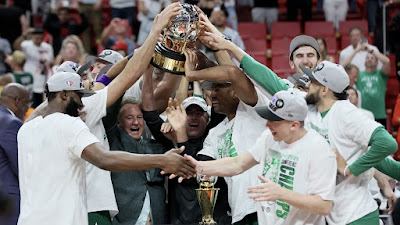 The Celtics are NBA Finals bound for the first time since 2010 after beating the Miami Heat 100-96 in Game 7 Sunday night to become Eastern Conference champions.
Despite Jayson Tatum (26), Jaylen Brown (24) and Marcus Smart (24) leading the team in scoring to finally get over the hump -- fourth East Finals appearance in six years -- it's only one step closer to reaching the ultimate goal, which is to raise the Larry O'Brien trophy in June.

"This wasn't the goal all season, right? This was just a step in getting where we want to get to, said Tatum following Game 7. "Obviously, this is a big accomplishment. We haven't been to the championship yet. I think it's alright to be proud of ourselves today and enjoy this. We're not satisfied, we know we still got a long way to go. I think it's alright to enjoy this tonight and be happy."

Tatum won the first ever Larry Bird Eastern Conference Finals MVP award after averaging 25 points on 46.2% from the field and 35.3% from deep, to go along with 8.3 rebounds, 5.6 assists and 1.1 steals per contest during a grueling series against the Heat. Jimmy Butler gave nothing but high praise to the Celtics All-Star.

"He does everything. Shoots the ball, can play in the pick-and-roll, passes the ball incredibly well, and gets out in transition," said Butler in his postgame comments. "He's a superstar. And he deserves that, they deserve the win, I wish him the best moving forward. But, he's one hell of a player, that's for sure."

While there has been plenty of deep playoff runs for Boston over the past several years, no one on this current Celtics roster has ever played in an NBA Finals game. But, when it comes to the Golden State Warriors, who you could argue are still in the middle of their dynasty run, have made it to basketball's biggest stage six out of the last eight years with three NBA titles to show for it. The trio of Stephen Curry, Klay Thompson and Draymond Green have a combined 82 games of Finals experience among them.
Al Horford, the only Celtic over the age of 30, had played the most playoff games (141) in league history without making an appearance in the NBA Finals, will now get his chance at 35 years old one day before he officially turns 36 on June 3.
Meanwhile, Ime Udoka is also heading to Finals in his first year as a head coach and at the helm of the Celtics, one of the most storied franchises in all of sports. As the kids say these days Udoka "understood the assignment" when he told the media "we've got four more," this past Sunday night. "We don't hang or celebrate Eastern Conference championships in the Celtic organization."
Though Udoka is excited for the opportunity to coach this Celtics team in the NBA Finals, considering all they have been through this season, he clearly is ready to start game planning against the Warriors.

"It's great to see the joy on their face, and that they have grown to this level where they're the veterans now that have to shoulder the load and could get us to this point. So happy for them, extremely happy for them," Udoka said in his postgame presser. "You smile about it as we're going through it, and we're on the plane, focusing on Golden State now."

Cleary the Warriors have been in this position on more than several occasions before. However, over the past seven seasons, no club has played them better than the Celtics have. According to NBC Sports Boston, the C's 9-5 record is the best by far against Golden State since the start of their dominant run, while ever other team in the league has a sub .500 mark.
For whatever it's worth, the Celtics finally get a crack at winning banner 18 (their first since 2008), which would be the most in league history, at the expense of the almighty Warriors -- who many thought would never make it this far again after a two-year absence from the postseason.
Game 1 of the NBA Finals will tip-off Thursday night from the Chase Center at 9:00 ET on ABC.
Joel Pavón
Follow @Joe1_CSP